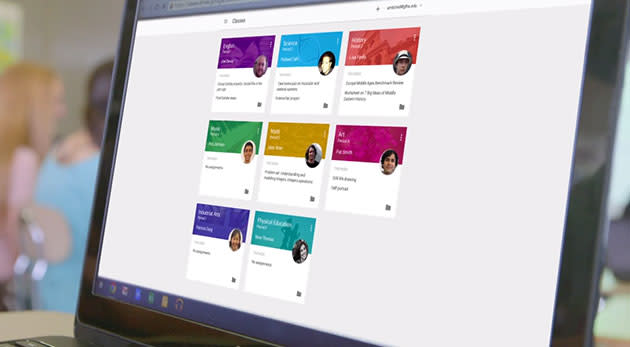 Google's itching to get Chromebooks into classrooms (and it's doing a pretty good job too), but the search giant just went full steam ahead with another product meant to help it shape the school experience. It's called (unsurprisingly) Classroom, and the free service is finally ready for enterprising Stand And Deliver types to take it for a spin before school starts again in earnest. Haven't heard of it before? Who could blame you -- chances are it won't be as downright crucial to your day-to-day the way Gmail is... unless you're a teacher plagued by too much paper. You see, Classroom lets teachers craft assignments that can be distributed, collected and graded from a sleek web interface, as well as start discussions and issue announcements to students (in 42 languages, no less). The upsides for teachers seem pretty straightforward, but Google's gains are substantial too: between Classroom and all those cheap Chromebooks, schools itching to smarten up could easily pledge their allegiance to Mountain View rather than Redmond or Cupertino. In this article: chrome, chromebooks, classroom, education, google, school
All products recommended by Engadget are selected by our editorial team, independent of our parent company. Some of our stories include affiliate links. If you buy something through one of these links, we may earn an affiliate commission.