​This Bluetooth bangle lights up to match your outfit, tells you when you miss a call 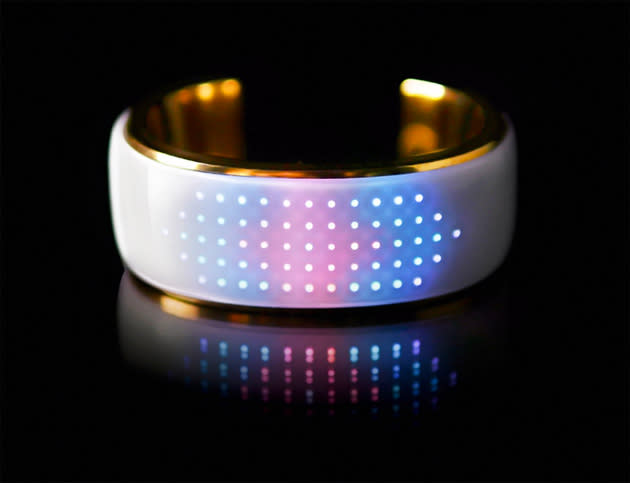 Need to have notifications on your wrist, but worried that a standard smartwatch will clash with your personal sense of style? Have you tried a smart bangle? There's one on Kickstarter if it suits your needs. Elemoon is a large, LED-laden bracelet that connects to your phone via Bluetooth - it's designed to straddle the line between fashionable and functional, with a heavy lean on the former. The device doesn't have a display as such, but can use a small grid of multicolored LEDs to display custom, low resolution notification icons. If the wearable's Kickstarter pledges are anything to go by, however, it's a little expensive for what it does.

A pledge of $200 buys a single Elemoon bracelet, but the device's function doesn't seem particularly robust. Aside from icon-based call and message notifications, the bangle can be used to find your phone (rubbing it causes the device to ring) and, well, match your clothes. Using the accessory's companion app, users can configure the bracelet's LED to match a photographed image -- that's neat, but the LEDs are only visible on the top of the wearable. Considering an Android Wear smartwatch can be had for a mere $30 more, Elemoon probably isn't the best value on the wearables market ...but nobody ever said being fashionable was cheap.

In this article: elemoon, Kickstarter, werable
All products recommended by Engadget are selected by our editorial team, independent of our parent company. Some of our stories include affiliate links. If you buy something through one of these links, we may earn an affiliate commission.