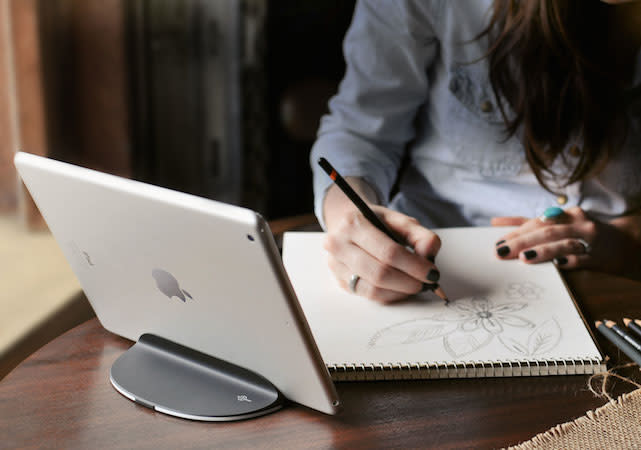 When an accessory PR rep says she's going to send me an iPad Air stand, I usually expect to receive a heavy package in the mail a few days later. That's why the new Ten One Design Magnus Air (US$39.95) surprised me so much when it showed up in a small padded envelope. Ten One Design touts the Magnus Air as a low-profile designer stand, but how does something with this little weight prop up an iPad Air? Read on to find out the secret to the Magnus Air.

OK, the secret to the Magnus Air is magnets. Really powerful magnets. You just place the Magnus Air near the left side of the iPad Air and it sticks to it like glue. Now you can flop the iPad Air onto its side and it is held in landscape orientation at a very comfortable viewing angle.

By building those powerful magnets into the Magnus Air, sticking the stand onto an iPad Air is like gluing a leg onto it. The stand isn't going to move, and if you need something to prop up your iPad Air that adds just a hint of weight, the Magnus Air is for you. The bottom of the stand is covered with a non-slip material, so the iPad Air and stand are going to stay put on a table, too.

Ten One Design's Magnus Air is designed to do one thing -- hold an iPad Air at a comfortable viewing angle in landscape orientation -- and it does that task perfectly. The Magnus Air is minimalism at its finest, adding functionality without being ostentatious or weighting down your backpack or briefcase.

I found the stand to be extremely useful in the kitchen. The 22° angle is perfect for viewing recipes while cooking, and the non-slip base ensured that I was going to be able to tap and swipe the iPad Air without having to chase it around my countertops.

One added touch to the Magnus Air over earlier versions of the Magnus stand is that you can also easily flip your iPad Air over to have it propped up in a very comfortable typing position. This horizontal option is great for people who like to use the virtual keyboard of the iPad Air.

Any gripes about the Magnus Air? Sure, I wish it was less expensive so more people would be tempted to pick one up. You can order 'em on the Ten One Design website, and they'll be in your local Apple Store soon.

Ten One Design's Magnus Air is a handy little accessory for anyone who owns an iPad Air and would like to be able to use it hands-free. It adds a ton of functionality to your favorite tablet without weighing you down. In this article: accessories, features, iPad, ipad air, Magnus Air, review, stand, Ten One Design
All products recommended by Engadget are selected by our editorial team, independent of our parent company. Some of our stories include affiliate links. If you buy something through one of these links, we may earn an affiliate commission.