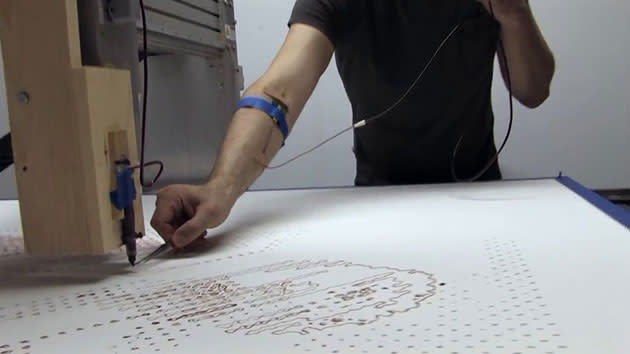 Snapping a selfie with your phone is easy enough these days, but in order to create a self-portrait, a Brooklyn-based artist chose a slightly different route. 44-year-old Ted Lawson hooked himself up to a CNC machine (which he refers to as a "robot") intravenously so that the device could draw a life-sized nude self-portrait with his blood. For the "Ghost in the Machine" work, Lawson had to remain connected to the output device while it plotted its marks to compose the sketch. "I'm generally not into doing selfies, particularly nude ones, but when I came up with the idea to connect my blood directly to the robot (CNC machine), it just made too much sense to not try one as a full nude self-portrait," he said. Lawson goes on to say that folks that may criticize his use of the machine for the piece, but leveraging the tool for drawing takes "just as much skill and practice to use as a pen." For a look at the process (obviously, not for the squeamish), head on past the break.

In this article: art, blood, bloodyhell, cncmachine, kindagross, printingwithblood, selfportrait, video
All products recommended by Engadget are selected by our editorial team, independent of our parent company. Some of our stories include affiliate links. If you buy something through one of these links, we may earn an affiliate commission.