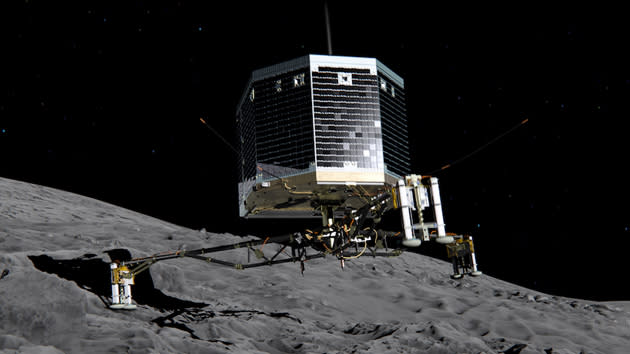 Now that the Rosetta spacecraft is orbiting its target comet, the European Space Agency is finalizing the plans for the ship's Philae lander ahead of a historic touchdown on November 11th. The team has picked five potential landing sites that meet its requirements, all of which should keep Philae in contact with its mothership, minimize terrain hazards and offer just enough sunlight to maintain power. Don't expect a quick decision-making process after that, though. The ESA won't rank its candidates until around September 12th, after Rosetta has had time to double-check the sites, and there isn't going to be a firm commitment until October 12th. Mind you, it's easy to understand the agency's trepidation -- choosing the wrong landing spot could either limit the amount of potential research or destroy Philae outright.

In this article: comet, esa, lander, philae, rosetta, science, space, video
All products recommended by Engadget are selected by our editorial team, independent of our parent company. Some of our stories include affiliate links. If you buy something through one of these links, we may earn an affiliate commission.