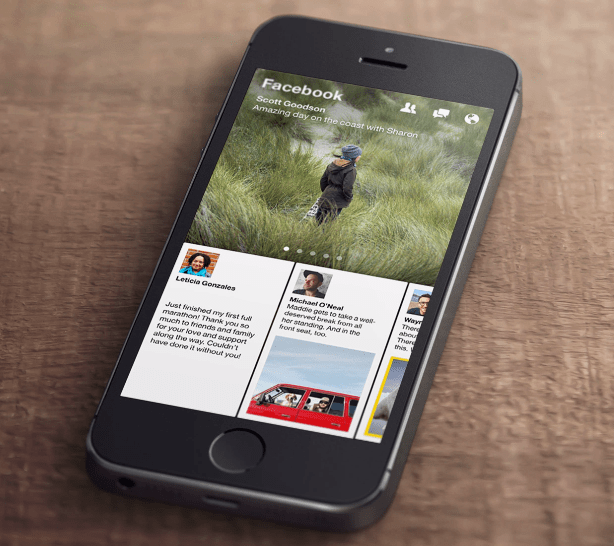 Facebook's Paper app launched to great fanfare and then quickly dropped on the charts. Many commentators decried the app dead in the water -- we may have been among those commentators. Of course, all of that was before the recent changes to Facebook's native iOS app which removed the ability to reply to or send messages from within the app. Ironically, Facebook's unpopular change in its original app is the saving grace of its lesser-used sibling.

Paper allows you to quickly view your timeline and answer messages from within one app, just like in the good old days of Facebook for iOS. You can view your timeline, comment on pictures, answer mail, and get right back into the swing of things without having to waste battery life by running two apps at once.

Using Paper does take some getting used to. Your timeline is shown at the bottom of the screen, so get used to scrolling with swipes to the left instead of swiping up. The app is designed to focus on your timeline and work as a newsreader of sorts. When you set up your account, the app will ask you to select a few interest "sections" you'd like to keep up with. To use Paper as an optimal Facebook experience, we'd suggest not adding any sections other than Facebook.

Best of all, Paper allows for more optimization than Facebook's native app. Hate autoplaying videos? You can actually turn them off in Paper with a tap in the app settings. The app includes a handy collection of options for sending articles to a reading lists like Instapaper, which again the main Facebook app doesn't have.

Paper isn't a perfect app yet, but it has improved considerably since it launched. You can edit your profile picture and cover photos, tag friends in photos, include mentions in your posts, use hashtags just like you would in the normal app, and customize the privacy settings of individual posts. Heck, there is even a noticeable drop in ads!

Sadly, all that glitters is not gold. Speed scrolling through your feed is slightly slower than the normal app and interacting with your various groups is more difficult, though responding to threads you're already following is a breeze. To actually access the full pages of your groups you'll have to manually search for them, but this is a minor inconvenience. It's worth it in the battery life you'll save.

We get it. Facebook is an addition for many people. It doesn't have to be an unpleasant multi-app battery draining one. If you're annoyed with the recent changes to the main app, give Paper a try. It's easier than quitting Facebook.

In this article: facebook, facebook paper, iPhone, messenger, paper, review
All products recommended by Engadget are selected by our editorial team, independent of our parent company. Some of our stories include affiliate links. If you buy something through one of these links, we may earn an affiliate commission.