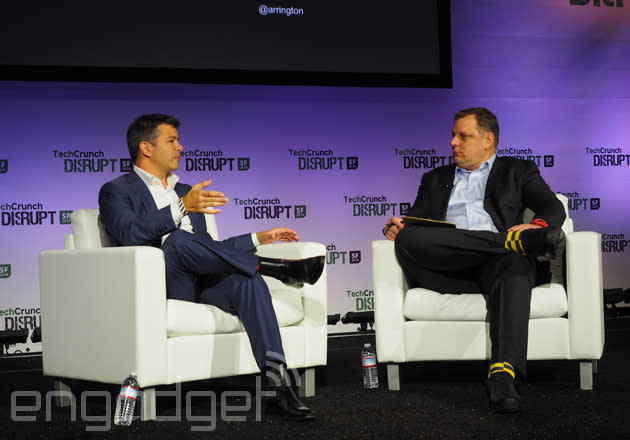 How fast is Uber growing? Pretty darn fast -- CEO Travis Kalanick claims the company adds tens of thousands of new drivers every month. "There are hundreds of thousands of partners connected to our system," he said at TechCrunch Disrupt this morning. "We're in the neck of 50,000 new jobs every month that are being created." Kalanick admitted he didn't have the exact number, but that's a pretty massive increase. Back in May, the company said it was adding an average of 20,000 new drivers every month. You're not alone in thinking those numbers seem a little optimistic. By comparison, the entire US added 142,000 job in August, according to the Bureau of Labor Statistics' latest jobs report.

The CEO didn't say directly where Uber's purported job growth is happening, but it could be overseas. "There's a lot of interesting stuff going on in China, there's 70,000 taxi drivers in Beijing," he says, and hundreds of cities with a population of millions. Even so, Uber's Chinese expansion faces stiff competition from local companies like Yaoyao Dache and DiDi Dache -- taxi apps that sometimes subsidize driver fares to offer cheap (or free) rides. Kalanick doesn't seem deterred by the impacted taxi market overseas, however, and says he's looking forward to the challenge. "What's really fun and awesome about what's going on in china is that we get to be the little guy," he says. "Why not try?"

In this article: disrupt, disrupt2014, techcrunch, Travis Kalanick, uber
All products recommended by Engadget are selected by our editorial team, independent of our parent company. Some of our stories include affiliate links. If you buy something through one of these links, we may earn an affiliate commission.