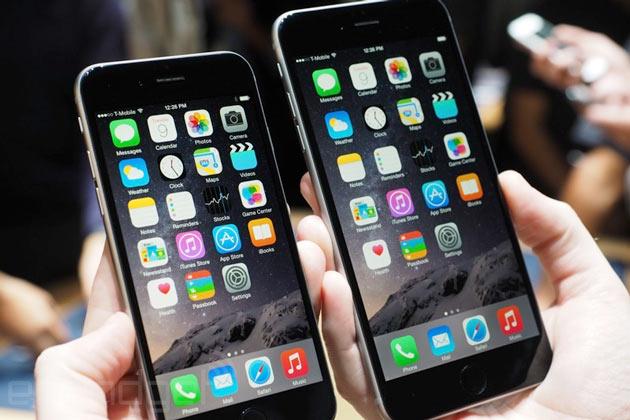 Even if you have been living under a rock for the past few days, chances are that rock will've told you about the new iPhones in town. We imagine there are more than a fair few of you chomping at the bit for them, too, so it's our duty to remind you that preorder day has arrived. And, assuming the new handsets will be relatively popular, you'll want to consider your options if you're determined to get in on the first batch. Whether it's the 4.7-inch iPhone 6 or the 5.5-inch iPhone 6 Plus you're after, basically every carrier and reseller under Sol is ready to supply you with one right now -- or give you an IOU for September 19th, at least. If you want to keep it simple and buy a phone outright, you might want to head straight to Apple's online store and stake your claim (you can also reserve one for in-store pick-up here). If you prefer your carrier alliances, however, then of course you've got your pick of the big four.

EE, for starters, will sell you a 16GB iPhone 6 or 6 Plus on contracts of £51 and £64 per month, respectively, when you lay down £30 up-front. Need more storage? Well, everything then hops on the £64 per month tariff, with only the 64GB 6 Plus demanding a higher down-payment of £50. That's also how much you'll need in-wallet to reserve a 128GB iPhone 6, with the Plus requiring a one-off £150 at that storage capacity.

After its store spent most of the morning under maintenance, O2 finally showed its hand, with its lowest pricing for the 16GB iPhone 6 starting at £38 per month with a £129.99 payment. The 64GB and 128GB models retain the same monthly cost but upfront costs rise as a result, setting you back £199.99 and £269.99 respectively. The iPhone 6 Plus follows a similar pattern, keeping the same monthly cost (except for the 128GB model), but the down payment increases slightly to cover extra cost of the handset. That means you'll pay £199.99 for the 16GB model, £269.99 for the 64GB variant and £249.99 for the 128GB option.

Three skipped out on the morning madness, so much so that its self-imposed "afternoon" window of opening up preorders is swiftly running out but now it's finally ready to sell you an iPhone! Luckily, the pricing is all pretty simple. Every model will set you back £99 upfront, apart from the 128GB iPhone 6 Plus, which demands £119. Contracts start at £38, £43 and £48 per month for 16GB, 64GB and 128GB versions of the iPhone 6, respectively; and for the 6 Plus, those prices go up to £44, £49 and £54 per month with increasing storage capacity.

As for Phones4u, the 16GB iPhone 6 starts at £34.50 per month and £149 upfront cost. Like Carphone Warehouse, bumping the storage will only result in a higher upfront cost, with the 64GB and 128GB models priced at £219 and £289 respectively. If you desire the iPhone 6 Plus, Phones4u will sell you the 16GB model for £34.50 with a £219 upfront payment. Increasing the storage to 64GB raises the down-payment to £289, while the 128GB model will set you back £369. Again, the cheapest plans are on Vodafone, but some EE tariffs are similarly priced.

We'll update this report as more information comes in.

In this article: apple, appleiphone6, appleiphone6plus, ios8, iphone, iphone6, iphone6plus, mobilepostcross
All products recommended by Engadget are selected by our editorial team, independent of our parent company. Some of our stories include affiliate links. If you buy something through one of these links, we may earn an affiliate commission.