New Grand Theft Auto 5 screens: Fly a jet, ride a bike, zip around in a Cheetah 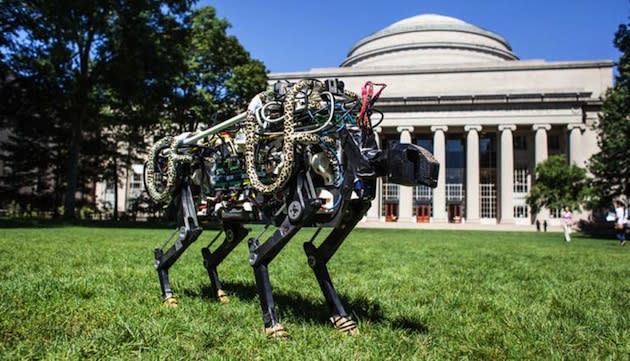 We've seen MIT's super-fast four-legged Cheetah bot sprint on a treadmill many times, but it seems that the team at MIT is finally ready to let the thing outside. Now, quadrupedal bots traversing hill and dale are nothing new, but the Cheetah's doing so using a new algorithm and without the benefit of an internal combustion engine or hydraulics. That algorithm determines the amount of force the bot's custom high-torque electrical motors deliver, which in turn controls how fast the robot runs and how high it leaps. Using this force-based approach, the Cheetah is more stable and agile, according to the boffins at MIT, and it can maintain its balance as the speed of its gait increases. Not to mention that the electric motors are quiet, so instead of an exhaust note, you only hear the pitter-patter of robot feet. This all adds up to a robot that can silently bound across uneven ground and even jump over obstacles. It's not as fast as its furry namesake... yet, but you can hear from its creators and see its bounding baby steps in the video after the break.

In this article: cheeta, cheetah, darpa, mit, robot
All products recommended by Engadget are selected by our editorial team, independent of our parent company. Some of our stories include affiliate links. If you buy something through one of these links, we may earn an affiliate commission.