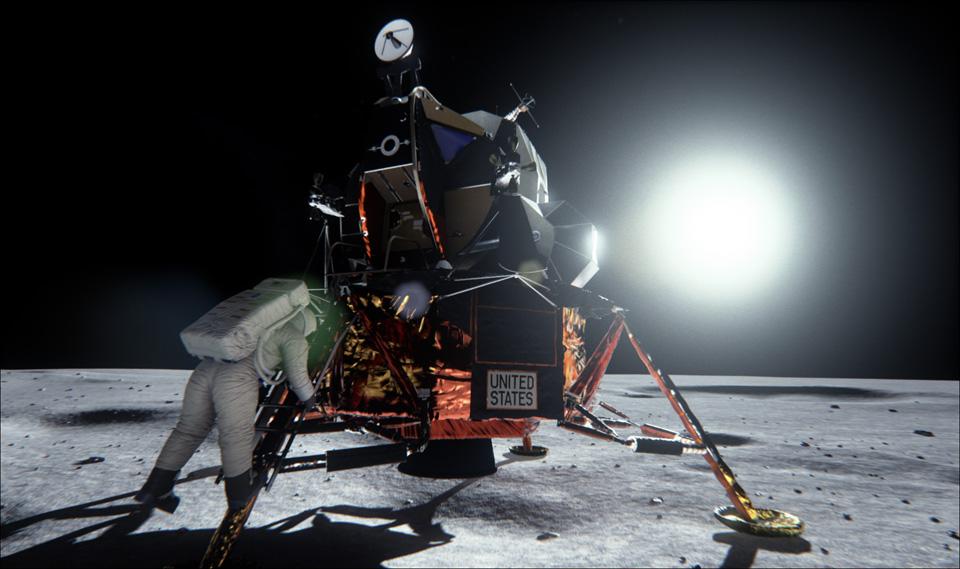 Despite overwhelming evidence to the contrary, there still exist some people on planet Earth who believe it's the only celestial body humanity has ever walked upon. You've heard it before -- the moon landing was a hoax, a mere TV drama produced by Stanley Kubrick presented as fact to dupe the Soviet Union into giving up the space race. This deliciously ludicrous conspiracy theory has been debunked countless times, but now its advocates have one more refutation to deny: NVIDIA's Voxel Global Illumination tech demo. It's a GPU-powered recreation of the Apollo 11 landing site that uses dynamic lighting technology to address common claims of moon-deniers, and it's pretty neat. Mark Daly, NVIDIA's senior director of content development told Engadget its Apollo 11 demo was created as an answer to Sponza -- a popular global illumination model frequently used in by the academic crowd. It's a good model, he says, but it's not very interesting to watch. "Jen-Hsun [Huang], our CEO, looked at it and said 'Isn't there something better?' Anyway, one of our research engineers happened to put this slide up of Buzz Aldrin on the moon in a meeting and said 'this speaks global illumination to me because of all the hoaxers and deniers of the moon landing." Conspiracy theorists say that Aldrin simply couldn't have been lit up the way he is in the picture. NVIDIA took it as a challenge. Buzz Aldrin (right) next to his computer-generated doppelganger (left)

NVIDIA chose to create a 3D rendition of a photograph showing Buzz Aldrin descending a ladder to the moon's surface. Folks that insist the landing was a hoax claim that without the light-diffusing effect of an atmosphere, the shadow of the lander should cast Aldrin in almost complete darkness. "You can explain it," Daly says, "and say light bounces around even on the moon... or you can show it. We decided to take the approach to show it, but it turns out that it's not that easy -- there isn't a lot of light on [Aldrin]." Daly's challenge was not in placing lights around a computer simulated scene of the Apollo 11 landing, but in using NVIDA's Voxel Global Illumination to make a single light source, the simulated sun, correctly reflect off of every material in the scene. To do this, he had to research the materials of NASA's lander, the brightness of our local star and even the reflectivity of the moon's surface.

"It turns out there is a lot of information about the astronomical bodies floating out there in space," he explains. "Starting with the sun. The sun itself is 128,500 lux -- that's lumens per square meter - but it turns out the moon is a crappy reflector of light." Daly discovered that the moon is only 12-percent reflective, and absorbs most of the sunlight hitting it. On the other hand, 12-percent of 128,500 lux is quite a lot. "It's the equivalent to ten 100-watt lightbulbs per square meter of light bouncing off the moon." More than enough make Aldrin visible under the lander's shadow.

While this exercise showed that the moon was reflective enough to highlight Aldrin, something was still wrong. Daly noticed that the astronaut's side wasn't lit the same in NVIDIA's simulation as it was in NASA's photograph, but he wasn't sure why. "A couple of people really into the moon landing told me, 'by the way, you should take into account Neil Armstrong and the light coming off of him.' At first I was like, yeah, whatever -- the sun is doing all the work -- something the size of a guy in a space suit isn't going to contribute much light." He quickly learned his assumption was wrong: the material on the outside of the astronaut's suits is 85-percent reflective. "Sure enough, we put him in there, adjusted the reflectivity of his suit, put him in the position where the camera would be... and it contributed another 10% or so of light to the side of Buzz Aldrin." Daly found that his own doubt mirrored the claims of some landing-deniers. Some claim that because Aldrin is in shadow, there would need to be some sort of auxiliary lighting behind the camera; supposed proof that the image was taken in a studio. "As it turns out, yes! They're right -- there was a light there, it was the sun reflecting off of Neil Armstrong's suit. I really didn't believe it would contribute that much."

It's the dynamic nature of Voxel Global Illumination that allows NVIDIA to poke fun at these hoax claims: the entire scene renders light reflection on the fly, based solely on the illumination provided by the simulated sun. "We learned a heck of a lot about how all these materials reflect light and put them into the material descriptions, the BRDF (bidirectional reflectance distribution function)," Daly said, explaining how developers create a VXGI lighting environment. "The VXGI we've integrated into Unreal Engine 4 reads all those materials you've given it and, based on the reflectivity of those materials, constructs a lighting module." It's a lot of work to set up, but it makes adjusting the light easy after the fact. NVIDIA is able to drag the sun to new positions, add new elements to the scene or even remove the moon's natural reflectivity to create the false conditions moon-truthers think represent the lunar surface. This versatility allowed NVIDIA to address one more hoax-claim before our demo ended: the stars. If NASA really landed on the moon, why can't we see the stars in any of the Apollo 11 photographs? Well, that's more of a matter of film exposure than lighting trickery. Because the unfiltered sun is so ridiculously bright (128,500 lux, remember?), the astronauts' cameras were set to use a small aperture, letting in only a fraction of the available light in order to keep the picture from blowing out. NVIDIA was able to simulate this too, and widened the virtual camera's aperture to reveal the demo's simulated stars. It worked, but at the expense of the camera's true subject matter: Aldrin's descent to the lunar surface became a blown out, over-exposed mess.

Science has been able to debunk these moon hoax theories for decades, but it's nice to see a simulation that can help illustrate those explanations in real time. Better still, Daly says NVIDIA is currently building a consumer UI for the demo, and will release it to the public sometime in the next several weeks. It's also a project that has become important to him. "Because I got to see a lot of this live when I was a kid, it has a special meaning to me. I know in Apollo 1 three men died, and other men risked their lives to get into these crazy contraptions to actually do this. It's kind of offensive to me when people say this didn't happen," he explains. "I want to show that it really happened and these people risked their lives. They actually did go to the moon."

In this article: apollo11, moonlanding, nasa, nvidia, video, Voxel Global Illumination
All products recommended by Engadget are selected by our editorial team, independent of our parent company. Some of our stories include affiliate links. If you buy something through one of these links, we may earn an affiliate commission.