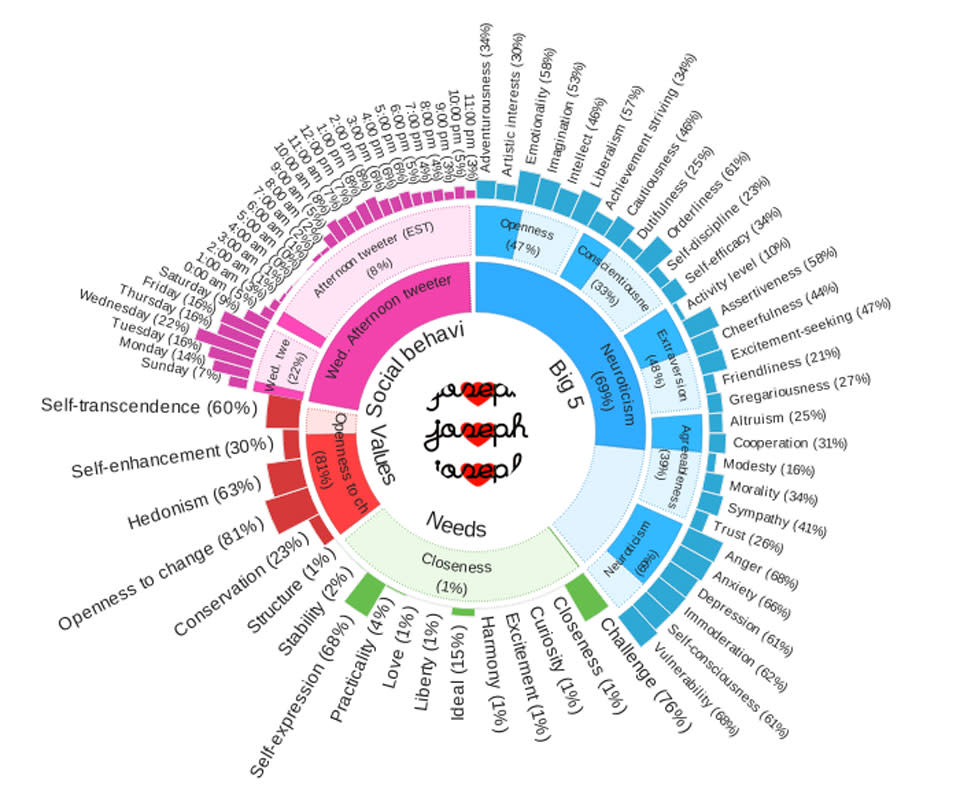 I'm a late Wednesday afternoon tweeter. It's not a characteristic I'd necessarily include on any of my dating app profiles, but it accurately sums up my online behavior nonetheless. I'm also a tremendous neurotic (which should come as no surprise to anyone who knows me well) who embraces self-expression, challenges and change. I'm that personality pie chart you see up above. I'm an open book, or at least my Twitter profile is to IBM.

Michelle Zhou greeted me with that handy personality breakdown when we met at IBM Research's Almaden lab in San Jose, California; she'd taken the liberty of finding out my Twitter handle beforehand and compiling the results. Zhou's the lead researcher for a platform called System U that analyzes the big data generated from an individual's socially networked life -- be that Facebook, Twitter, emails or even chats -- to determine their values, beliefs and personality traits. If you're not a fan of labels, then you won't like Zhou's work; after all, it did expose me for the impulsive, OCD ice queen that I am. But then again, it's not Zhou that's placing you into neatly labeled boxes; it's your own words that are responsible.

If you're not a fan of labels, then you won't like Zhou's work; after all, it did expose me for the impulsive, OCD ice queen that I am.

System U is based off of the study of psycholinguistics, a branch of cognitive science that examines how we acquire, use and effectively interpret language. With this as a foundation, Zhou's platform focuses on defining individuals according to three main areas of psychological profiling: the Big Five personality traits (i.e., openness, conscientiousness, extraversion, agreeableness and neuroticism); basic human needs; and values. It even deconstructs our online social habits, hence the revelation that I tweet heavily during lunch on hump day. It's not unlike the internal testing major social networks do with their own masses of user data, except IBM's platform aims to mine all of that data to build a cohesive psychological profile.

Zhou's big data cruncher isn't infallible -- I certainly take umbrage with the notion that I'm an angry fellow -- but it is statistically significant. In fact, Zhou's team conducted studies to prove the efficacy of System U and found that its results are over 80 percent accurate. That mark of scientific worthiness means the platform's also good enough for IBM to license it as a business tool. Zhou said IBM's already been working with several unnamed enterprise clients to apply System U and derive insights into those companies' respective customer bases. Participation, Zhou stressed is, of course, opt-in, so individuals won't have to worry about being unwitting pawns in a big business/big data profiling scheme.

As Zhou explained, "This is a very new technology." And it's one we better get used to.

Watch as Zhou details how the words we use online can be used to paint an accurate portrait of who we really are on the inside.

In this article: bigdata, Facebook, ibm, ibmresearch, MichelleZhou, psycholinguistics, psychology, research, SocialNetworking, SocialNetworks, SystemU, Twitter, uk-feature, video
All products recommended by Engadget are selected by our editorial team, independent of our parent company. Some of our stories include affiliate links. If you buy something through one of these links, we may earn an affiliate commission.