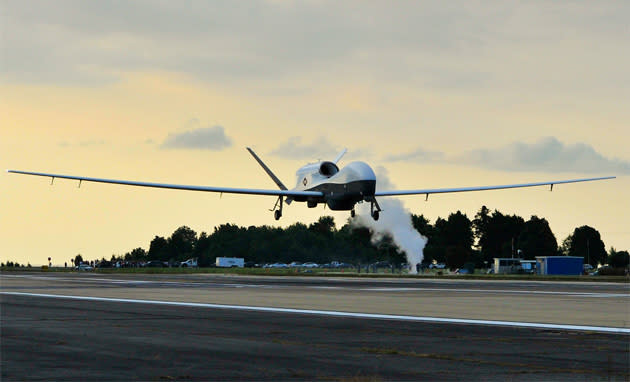 While Triton -- the US Navy's largest unmanned craft -- might have no one in the cockpit, it still requires a hefty ground team to keep it (safely) in the air. Never more so than on a recently completed cross-country flight. Back in March, the Northrop Grumman craft completed initial flight testing, but this 11-hour 3,290 nautical mile flight is the most intensive testing yet -- bringing it ever closer to the estimated 2017 delivery into operational Naval fleets. Triton's route took it from from Northrop Grumman's Palmdale, California base along the southern US border, before a successful landing at Naval Air Station Patuxent River. Triton spends most of its time at around 50,000 feet -- well above domestic flights -- but has sensors that allow it to safely descend through cloud layers for closer observation of enemy ships as needed. Watch Triton pull off its silky smooth landing after the break -- human pilots take note!

In this article: drone, Northrop Grumman, triton, UAV, video
All products recommended by Engadget are selected by our editorial team, independent of our parent company. Some of our stories include affiliate links. If you buy something through one of these links, we may earn an affiliate commission.