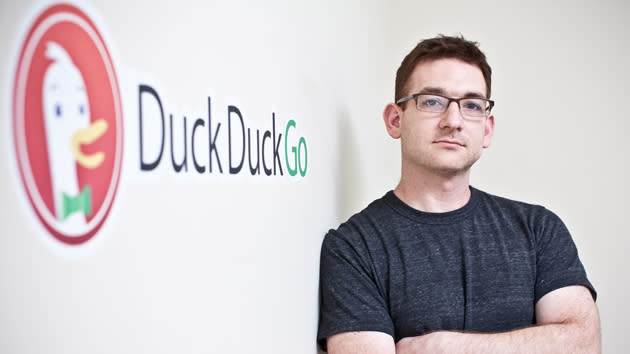 If you've been using DuckDuckGo's privacy-focused search engine to get around China's stringent censorship while also hiding your tracks, you'd better start looking for an alternative. The company's Gabriel Weinberg (above) has confirmed that China blocked DuckDuckGo at some point in recent memory; GreatFire suggests that the crackdown came on September 4th. No matter when it happened, the move makes it that much harder to search the full internet when you're in the country. Given that Google is already blocked, you're now largely relegated to censored versions of Bing, Yahoo and domestic sites like Baidu. That's a particularly sore point if you're traveling to China with an iPhone -- Apple added DuckDuckGo as a default search choice in iOS 8, but you won't get to use it while you're sojourning in Shanghai.

In this article: censorship, china, duckduckgo, internet, privacy, search, web
All products recommended by Engadget are selected by our editorial team, independent of our parent company. Some of our stories include affiliate links. If you buy something through one of these links, we may earn an affiliate commission.