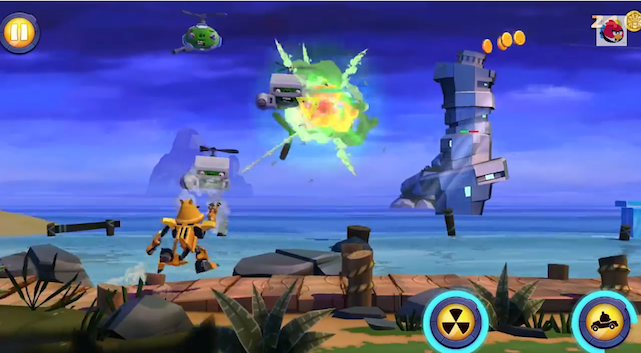 It would be easy to believe that we've reached the point of cultural saturation for Angry Birds thanks to its seemingly limitless supply of spinoffs. How many possible more Angry Birds games can the market possibly support? The answer is "at least one more" if Angry Birds Transformers can live up to it's ridiculous launch trailer.

Featuring side scrolling shooter action, Angry Birds Transformers pits you as both Autobots and Decepticons as you blow up waves of pigs and their towers. The game play shown brings to mind the SNES classic Wild Guns as enemies pop up from all sides, including the background. Long time Transformers fans will notice the cameo from Astrotrain, who despite being a Decepticon appears to be helping the Autobots in this game. If you understand anything I just wrote, watch this trailer immediately.

In this article: angry birds, angry birds transformers, rovio
All products recommended by Engadget are selected by our editorial team, independent of our parent company. Some of our stories include affiliate links. If you buy something through one of these links, we may earn an affiliate commission.