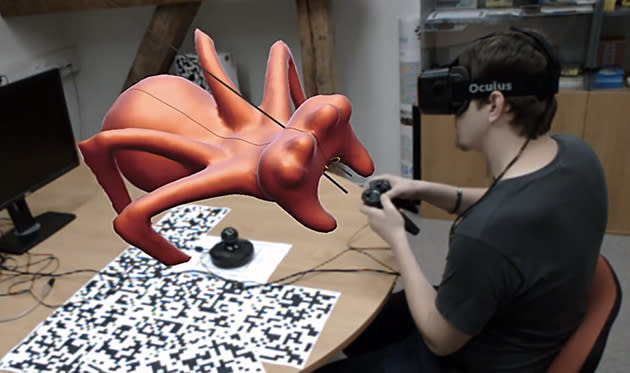 In case you needed yet another reminder that we live in the future, take a look at what happens when someone mashes up the Oculus Rift and Razer's handheld Hydra motion controllers with some nifty homebrew sculpting software. The end result is VRClay, an awfully nifty way to virtually manipulate and craft three-dimensional objects right in front of your face. Watching one of the developers making a faux-clay spider out of nothing is undeniably cool (check out the video after the break), and despite all the additional hardware that makes it possible, the process of actually creating the thing still seems just a little more natural than rotating and poking with a keyboard and mouse. Alas, VRClay doesn't seem to be ready for primetime yet: it's not clear how precise and meticulous you can get with your designs, and the developers are keeping mum over on the official site. Still, this is the latest in a long line of technical achievements meant to make creating easier. British game developer Media Molecule showed off something very similar for the PS4 in early 2013, and Microsoft's Project Spark aims to get us sculpting landscapes and the like -- the latter will finally debut in a few short weeks.

In this article: 3d, art, motion, oculus, oculusrift, razerhydra, sculpting, sixsense
All products recommended by Engadget are selected by our editorial team, independent of our parent company. Some of our stories include affiliate links. If you buy something through one of these links, we may earn an affiliate commission.