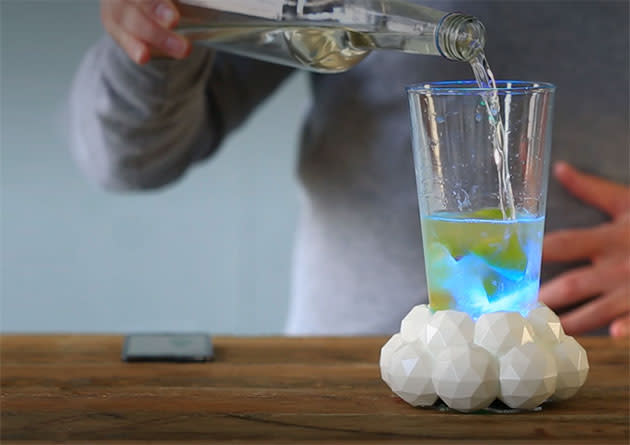 It takes time to hone your cocktail craft. Thanks to Ozz, the learning curve isn't quite so steep. The device visually guides pouring and mixing so that you don't have to worry about eyeballing the notches on a shot glass. A companion app for iPhone and Android sorts recipes and ingredients lists, allowing you to fine-tune proportions to fit your taste. Once you've settled on a beverage, the geometric Ozz base lights LEDs around the rim of a glass to let you know when you've added enough of that particular ingredient. Load sensors and lights are guided by that smartphone via Bluetooth, and after a marathon martini session, a built-in micro-USB jack handles charging. Ready to opt in? Early Kickstarter backers can secure one for €69 ($87), but those who hold out will have to fork over €99 ($125). Of course, if you choose to make that Old Fashioned with Old Crow and cheap bitters, you'll still end up with a shitty drink.

In this article: alcohol, bar, cocktail, drinking, drinks, kickstarter, video
All products recommended by Engadget are selected by our editorial team, independent of our parent company. Some of our stories include affiliate links. If you buy something through one of these links, we may earn an affiliate commission.