Gamers spent a lot more time playing on Steam in 2020

'Hogwarts Legacy' has been delayed to 2022 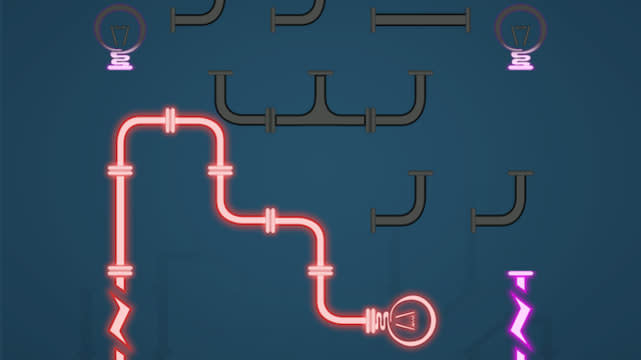 It would seem there is a never-ending influx of strategy and puzzle-related games coming down the App Store pike, and for good reason. There is a burgeoning group of fans waiting to try them, critique them, and talk about them to their friends and on social media. With this kind of context, Light 'em Up should find a niche very quickly. The free app is available for iPhone, iPad, and iPod Touch and is optimized for iPhone 5, running on iOS 6.0 or later.

The game's basic premise is simple: Building on a puzzle-assembly motif, the player must connect various glass tubes and other pieces, such as light bulbs, in order to make an electronic connection and light up the bulb and tubes. The player must tap each tube and bulb to rotate them in order to make the proper connection. This sounds simple enough, and in the early stages it is. Players will find themselves racing against both an allotted time (which changes depending on the level) as well as an allotted number of taps (each tap counts as one move). Use up all your moves, or fail to light all the bulbs \by the end of the given time, and you have to start over. This game is genius, simply put. I'm a thinker and armchair strategist, so these kinds of puzzle-esque games appeal to me. I like having to think ahead, plan, and ponder. The interesting thing about this game is that you may have to tap the tube or bulb more than once to get it into the proper position, which is both a good and bad thing. It's good because it allows one a process of elimination in figuring out which connections will work and which won't. But it also uses up one's allotted moves, which can be frustrating and detrimental to advancing in the game. Granted, as one grows in their abilities and strategies this may become less of a problem, but it was nerve-wracking and annoying on higher levels, some of which have less time.

Another interesting feature which I had not anticipated is that not every single tube has to be used. At first, I was concerned because I was making all of the necessary connections and even lighting up all of the bulbs but had several pieces unused. I am not entirely sure of the purpose for this. I do not know if the game designers have more than one possible solution for each level (which would be likely, though I typically stuck with the first one that worked) which necessitated the extra pieces, or if perhaps they are supposed to test the player's ability to know which pieces are necessary and which are extraneous (which will thus save both time and moves). I'm not sure. But it was nice to know I was lighting all of the bulbs without having to rely on all of the tubes given. My biggest two critiques of the game are as follows. The first is the presence of ads. This is a sticky issue for me, as I realize free apps have to make some kind of income. However, I feel the placement of the ads is meant to be deliberately annoying. The banners on the bottom of the screen are not really a problem; it is the banner across the middle of the screen after every successful completion of the level that is the worst. Additionally, there are regularly pop-up ads that fill the screen (these can be closed and only occur once every other level or so), along with video ads that come up randomly.

The videos were the worst for me. The first time the screen went black in order to start playing one, I actually thought something was wrong with my iPhone; I wasn't accustomed to it going black for no reason. They are not very long, typically only fifteen seconds to a minute in length, but they do distract and annoy. The good thing is that players have the option of purchasing an in-app ad-free version, but this also costs US$0.99. I ended up purchasing this because during later levels, players must drag the screen different places to build extended parts of the puzzle, and the ads were getting in the way. So, I really don't like having to pay money (in a free app!) to avoid ads, but most players will need to pick this option. The other critique I am genuinely on the fence about: time limits. I have zero problem with limits in themselves, as having to complete tasks within a certain time frame heightens both the challenge and the strategy of gameplay. However, in at least one level, it appeared next to impossible to complete the entire puzzle in the fifteen seconds I was given. (In comparison, other, sometimes less difficult puzzles in later levels were given as much as a minute and fifteen seconds).

This, coupled with the banner ad blocking my view, made me have to play this level over and over again. I lost count of how many times, actually. This felt odd because the time limits seemed uneven. I don't care if different levels have different times, but when a later, easier puzzle is given either a much longer time limit or a larger move limit, and this puzzle gets only fifteen seconds, there seems to be an issue.

Despite these issues, Light 'em Up remains a fantastic, addictive, and brilliant game. If you're looking for a nifty brain-stretcher that will light up your screen (literally), thoughtful players needn't look any further than this.

In this article: games, iOS 6, iPad, iPhone, iPod, lights, review
All products recommended by Engadget are selected by our editorial team, independent of our parent company. Some of our stories include affiliate links. If you buy something through one of these links, we may earn an affiliate commission.