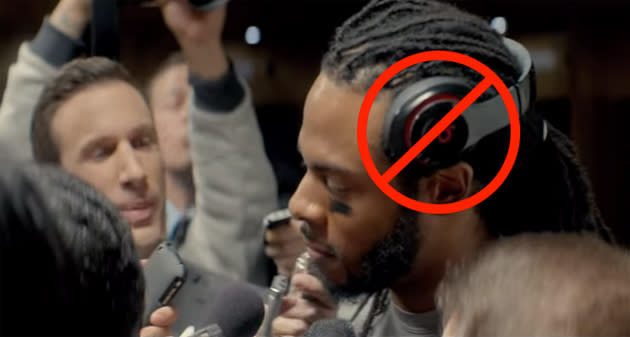 Back in March, the NFL reached a deal to make Bose its official audio provider -- nothing special at the time, especially given the league's fondness for technology agreements. However, it now looks like this pact is about to influence the headphones you see on camera. The NFL has confirmed to Recode that the arrangement prevents players and coaches from wearing anything but Bose gear in the moments they're on TV in an official capacity, whether it's just before kickoff, on the sidelines or in locker room interviews. In other words, the scenarios you see in a few Beats commercials (where players tune out interviewers and hostile fans using the company's headphones) would get the athletes in trouble.

Such deals aren't that unusual elsewhere. FIFA, for instance, prevented teams at the 2014 World Cup from using Beats either on game days or at media events. For Americans, though, the NFL exclusive is bound to be much more noticeable -- something Bose is no doubt counting on as it tries to win the high-priced audio wars. It has just 22 percent of the US' over-$100 headphone market versus Beats' whopping 61 percent, according to the NPD Group, so any success with the agreement could mean that you'll see considerably more Bose hardware both on and off the field.

In this article: apple, beats, bose, football, headphones, nfl, sponsorship, sports, video
All products recommended by Engadget are selected by our editorial team, independent of our parent company. Some of our stories include affiliate links. If you buy something through one of these links, we may earn an affiliate commission.