Robots that pick up and sort objects may improve warehouse efficiency 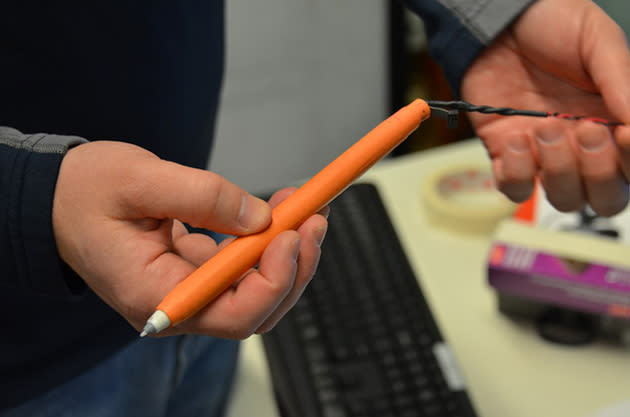 Believe it or not, there has been limited research into the way we hold a pen for different writing tasks. A team at Microsoft Research has taken aim at those fine motor skills with a prototype stylus and tablet combo. The duo packs in inertial sensors to track the position of each while in use. A multi-touch grip sensor wraps the outside of the stylus that not only monitors how its held, but can also initiate tasks with a mere finger tap. Sure, button controls have long been built into styli, however this effort investigates the grip as a means of swapping between tasks. During the test, holding the pen-like peripheral a certain way accesses a specific tool set or keeps a resting palm from prohibiting movement with the other hand. On the tablet, the sensors can tell when the slate is being passed off to another user -- swapping to that person's fine-tuned presets automatically. Of course, all of this is still in the research phase, but enhanced touch recognition for stylus-driven devices like the Surface Pro 3 would certainly be a welcome boost.

In this article: grip, microsoft, microsoftresearch, research, styli, stylus, video, writing
All products recommended by Engadget are selected by our editorial team, independent of our parent company. Some of our stories include affiliate links. If you buy something through one of these links, we may earn an affiliate commission.