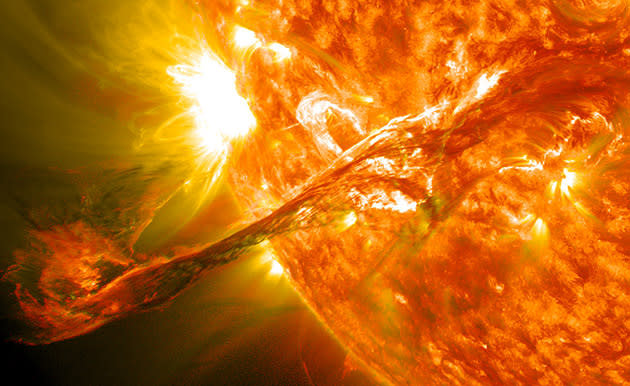 Met Office, the UK's weather forecast agency, has just launched a new division that monitors out-of-this-world weather conditions -- literally. Thanks to a £4.6 ($7.5) million funding from the government, the agency built a Space Weather Center right out of its Exeter headquarters to keep a close eye on solar flares, coronal mass ejections (CME) and geomagnetic storms. Seeing as the UK's National Risk Register lists space weather as the fourth most dangerous threat to the region's infrastructures, it's not so odd that the government will fund the center's operations. After all, it'll be in charge of issuing early warning signals, so the world can prepare for the the usual effects of solar storms, like GPS or radio signal interruption, satellite damage or even power grid outages and heightened radiation in worst case scenarios.

While the center's a UK project, it's business manager, Mark Gibbs, says it's really the "culmination of more than three years' work drawing on the collective resources and expertise of the UK and USA [from the time PM Cameron and President Obama announced their collaboration in 2011]." In fact, one of the center's partners in monitoring space weather 24/7 is NOAA's National Weather Service. We just hope that they won't have anything bad to report, and that every solar storm just leads to pretty auroras.

In this article: CoronalMassEjection, exeter, MetOffice, SolarFlare, SolarStorm, space, spaceweather, weather
All products recommended by Engadget are selected by our editorial team, independent of our parent company. Some of our stories include affiliate links. If you buy something through one of these links, we may earn an affiliate commission.