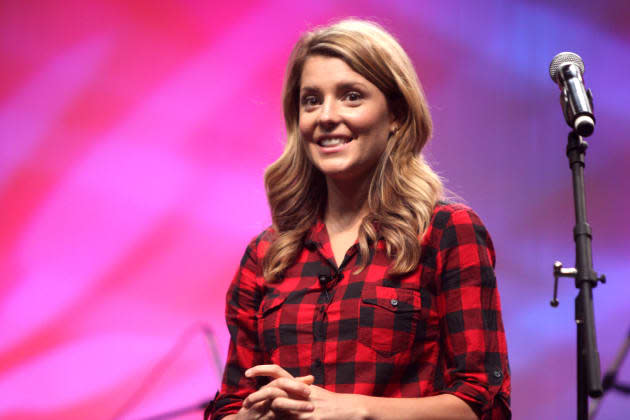 Let's say you can't get enough of it'sGrace (above) on YouTube but you're taking a week-long no-tech camping trip soon and aren't excited about missing her wit and charm. Well, host Grace Helbig's book Grace's Guide: The Art of Pretending to Be a Grown-up is out next week, so that won't be a problem for much longer. She isn't alone, either, as other YouTubers are getting publishing deals as well, according to The Wall Street Journal. Alfie Deyes of Pointless Blog fame and style/make-up vlogger Michelle Phan have tomes out and en route, respectively, too. All have subscribers by the millions (Phan has over 7 million), and publishing houses are apparently hopeful that their online success translates to reaching teens, getting them to post about the books on Twitter, Instagram and probably Tumblr too.

Entertainment production house Dreamworks SKG is getting in on the action with a pair of YouTube-based books too. WSJ notes that this could be a way to combat the (unpopular) way YouTube splits ad revenue with its content creators and fill in the tip-jar gaps. There isn't a guarantee that this will work out in the longterm for any of the involved parties, especially considering that it's relatively new ground and watching video clips online is more or less free whereas books cost money up front. There's also the matter of the time and attention span that it takes to watch a video rife with quick cuts and other editing techniques, versus that of reading a book. If these early deals prove successful, though, it isn't a stretch to imagine that they'll become more and more common.

In this article: alfiedeyes, BookDeals, books, google, gracehelbig, internet, MichellePhan, Publishing, youtube, YoutubeStars
All products recommended by Engadget are selected by our editorial team, independent of our parent company. Some of our stories include affiliate links. If you buy something through one of these links, we may earn an affiliate commission.