The NBA counts more than a billion likes and followers

Twitter tests emoji reactions for the times a heart won't do

The Daily Grind: Why do you love your favorite game? 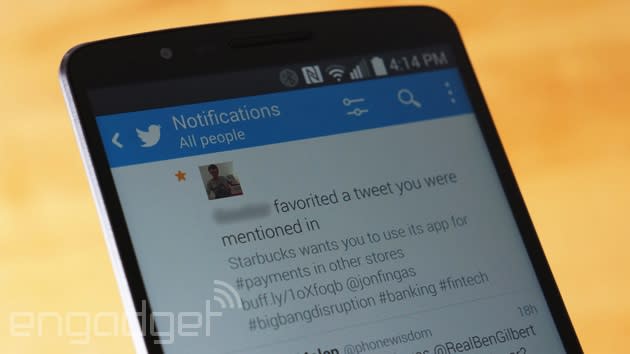 Remember when tweets started appearing in your Twitter feed from people you weren't even following? Well, it's no longer an experiment. In a post outlining Twitter's "spirit of experimentation", the social network says it's happening across all accounts now, in the interest of surfacing tweets it "think(s) you'd enjoy." While many of Twitter's power-users might sigh collectively, Twitter is likely hoping it'll offer up faster follows, a richer experience and (possibly) boost activity, especially for those users that aren't already following hundreds of accounts. Alas, it's not an optional thing, and is now an integral part of everyone's Twitter timeline -- alongside those occasional promoted tweets and retweets.

In this article: favorites, follow, hometimeline, timeline, twitter, unfollow
All products recommended by Engadget are selected by our editorial team, independent of our parent company. Some of our stories include affiliate links. If you buy something through one of these links, we may earn an affiliate commission.