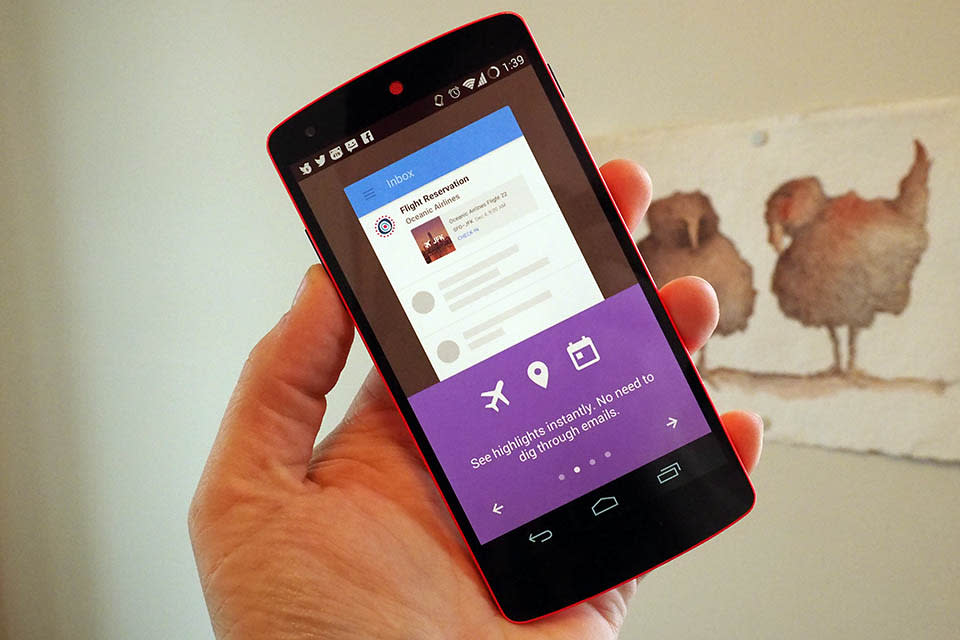 If you're anything like us, Google's Gmail has an iron grip on your life. Google's looking to create a whole new iron grip with a new app from its Gmail team, and it's called "Inbox." What is it? That's a good question -- Google's made a demo slash advertisement video that we've dropped below. As far as we can tell, Inbox is a combination of Google Now and your Gmail inbox -- a "smart" inbox, if you will. It combines alike pieces of email (bank invoices, for example), highlights related information (like Google Now alerting you to flight changes, traffic, etc.) and keeps track of your life (it'll give you reminders, among other heads ups). Is this the end of Gmail? We seriously doubt it, but it is Google's latest foray into simplifying email. Head below for more!

In introducing the service, Google's Sundar Pinchai called out the frustration of an overflowing email inbox. Inbox is Google's attempt to make the inbox more approachable and organized without much user effort. " For many of us, dealing with email has become a daily chore that distracts from what we really need to do-rather than helping us get those things done," Pinchai wrote. "If this all sounds familiar, then Inbox is for you. Or more accurately, Inbox works for you."

As seen below in GIF form, the app both shows prioritized events and emails you've received. Think of it as the lovechild of Cards and Gmail. Whether it'll replace our standard Gmail app is another question altogether; trading the flexibility of Gmail for a more streamlined inbox is appealing, but also Gmail has an iron grip on our lives. In case that wasn't clear the first time.

The app's still in the invite stage, and Google says the first round of invites are already out in the world. Should your current Gmail (or whatever service) inbox be without an invite, Google's set up an email address (inbox@google.com) for you to ask to get in on the action. It's only running on a Nexus 6 in the image, but Google says it runs on Android phones with Jellybean or better (4.1+) and iPhones running iOS 7 or better. There's a web-client as well, but it's a Chrome-exclusive.

In this article: email, gmail, google, googleinbox, inbox, mobilepostcross, video
All products recommended by Engadget are selected by our editorial team, independent of our parent company. Some of our stories include affiliate links. If you buy something through one of these links, we may earn an affiliate commission.