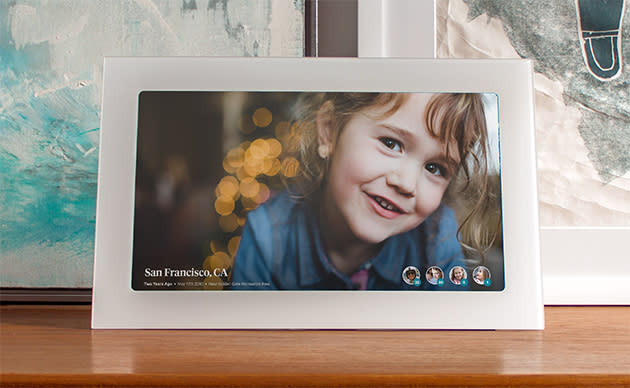 Digital picture frames seemed like all the rage back in 2007, but let's be real: did anyone really like them? They were small, clunky, not terribly high-res, and sort of a pain to actually get photos onto -- long story short, they had plenty of potential that was marred by lame execution. That's where a startup called Fireside comes in. The bi-coastal team didn't just spend the last two years trying to build a better picture frame -- they wanted to get people rethinking how they interact with all those encapsulated memories of the past.

That's a pretty lofty goal, so let's break it down a little - Fireside's vision really consists of two parts. There's the handsome, Android-powered SmartFrame itself, which packs a 15-inch, 1080p IPS display and 64GB of internal storage to house all your shots and media. The other half of the equation is a mobile app for your iPhone or Android device that essentially slurps up all the photos and videos from your phone's camera roll and uploads them to the company's cloud servers. From there, those files are pulled back down onto the SmartFrame itself and stored there for quick access. Voilà, your content now lives on a second screen and you didn't have to do a thing - that's one of the biggest issues of a traditional digital picture frame conveniently removed from the picture. Co-founders Andy Jagoe and Don Lehman figure the real magic is how the SmartFrame figures out what to show you. See, it also takes into consideration all that juicy metadata that comes embedded in the pictures you take - like when they were snapped and where - and algorithmically chews on it all to figure out when it should display what. Is it your kid's birthday? The SmartFrame'll highlight pictures from the same day in years past. Itching to see all those photos from your trips to Hong Kong? Just punch in that keyword into the Fireside app and you'll have a channel full of Mongkok memories running in no time.

Jagoe told Engadget that using Fireside isn't unlike playing with Pandora -- the more people sift through their memories with keywords and likes, the better Fireside gets at sussing out what it is they actually like to see. The end result? Ideally, the co-founders believe, you'll be able to dive into the right memories at the right moment. Alas, be prepared to shell out some pretty pennies for the promise of memories on-demand. Fireside is trying to bring the SmartFrame to life by way of Kickstarter, where you'll be able to claim one for $399 (or $339 if you act really quickly) ahead of its 2015 release.

In this article: cloud, digitalpictureframe, kickstarter, photo, photos, pictureframe, pictures
All products recommended by Engadget are selected by our editorial team, independent of our parent company. Some of our stories include affiliate links. If you buy something through one of these links, we may earn an affiliate commission.