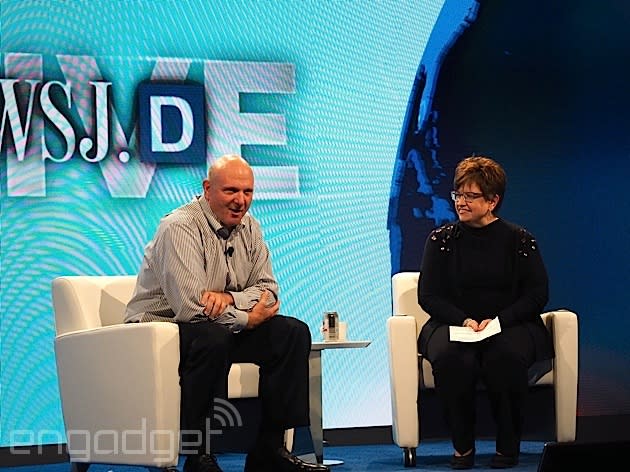 Former Microsoft CEO Steve Ballmer ended the WSJD Live conference with a burst of energy in a talk with Wall Street Journal reporter Monica Langley about his post-Microsoft life. He was boisterous and enthusiastic during the entire interview, especially when talking about the LA Clippers, a basketball team he purchased just over two months ago. But he also took some time to answer questions about his continuing role in the company he used to lead.

Particularly, Ballmer has no plans to deviate from his Microsoft allegiance. After all, he owns four percent of Microsoft stock and is its largest individual shareholder. He even handed out Surface Pro 3s to every Clipper player and has kind words to say about Satya Nadella, the company's current CEO. Reiterating his belief in Microsoft's strong enterprise franchise, hardware and software products and "leading business in the cloud," he deflected Langley's questions about his missteps in social and mobile, pointing instead to a bright new future under new leadership. "It's up to my successor to make of these things now. Our job is to look forward."

In regards to Microsoft's tenuous relationship with Silicon Valley, Ballmer said that the good thing about having a new person in charge is that he has the freedom to set new rules. "Satya has a new opportunity to build a relationship," he said. He added that he really wants Microsoft to "keep moving" and make "big bets" like it did with the Surface and Nokia. "I want to hold the stock til I die or until I give it away." When asked if he talks to Nadella often, Ballmer says that they spoke just a few weeks ago. "Whenever he wants to talk, I'll talk."

Aside from that, Ballmer said that he's spent some time in our nation's capital to see if he can make some kind of civic difference with his millions. He did stop short from saying he'll run for office, which he says "will never happen." He also confessed to binge-watching "The Good Wife" in the days after he left Microsoft and that he's studying up for his Bar Mitzvah, which he never had.

For now, though, his focus is entirely on the Clippers, especially before the big season opener tomorrow. The Clippers, he said, is the first NBA team to have LEED-certified lights in the stadium. He also treated the audience to a brief rendition of a song from an upcoming team television ad, which is apparently "LA Love" by Fergie. "I WANT TO WIN A LOT OF GAMES," he shouted enthusiastically. After a brief pause, he added: "And make some money."

In this article: ballmer, laclippers, microsoft, steveballmer, wsjdlive
All products recommended by Engadget are selected by our editorial team, independent of our parent company. Some of our stories include affiliate links. If you buy something through one of these links, we may earn an affiliate commission.