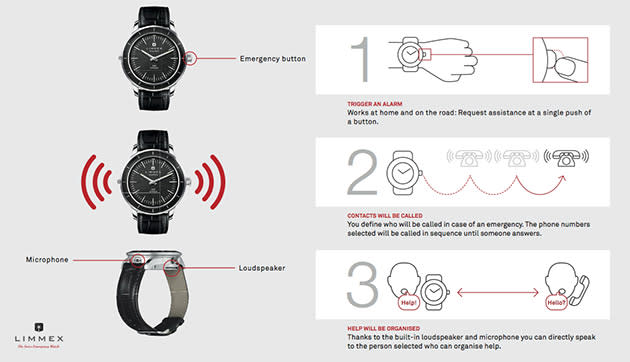 There are some smartwatches out there like Will.i.am's Puls that can make voice calls without having to connect to a phone. But have you ever heard of an analog watch with the same capability? No? Well, now you will: the GPS-equipped Limmex emergency watch looks like a perfectly old-fashioned Swiss timepiece, except it has an emergency button you can press that calls preprogrammed contacts. You don't even need to wear an earpiece to use it, as it comes with built-in mic and loudspeaker. In case you've saved more than one number to call during emergency, the device rings 'em all up in sequence until someone picks up. Also, the watch automatically sends your contacts a text message with a link to a map that shows them where you are. The device is currently available in a handful of European countries with prices ranging from €449 to €749 (roughly $570 to $950), though it sounds like the company plans to release it in other locations in the future.

In this article: emergency, limmex, watch, watchphone
All products recommended by Engadget are selected by our editorial team, independent of our parent company. Some of our stories include affiliate links. If you buy something through one of these links, we may earn an affiliate commission.