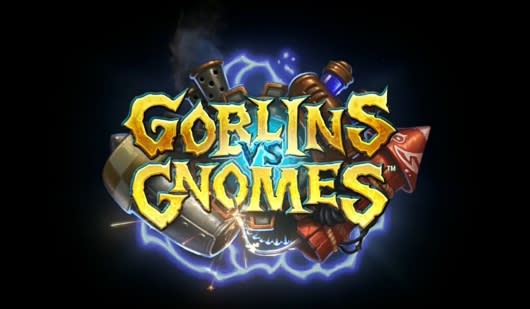 It's about to get all funky and explosive up in Hearthstone. At BlizzCon today, the team announced that the upcoming expansion is called Gobins vs. Gnomes and will be releasing next month.

Hearthstone: Goblins vs. Gnomes will contain over 120 new cards that draw upon the innovations of these clever and mad inventors. Two of the cards mentioned were the Explosive Sheep and the Annoy-O-Tron. Currently, the expansion is "in a final balance pass" prior to its December launch.

Hearthstone will also be coming out on Android devices next month.
In this article: blizzard, blizzard-entertainment, blizzcon, blizzcon-2014, ccg, ccgmmo, con, convention, event-coverage, expansion, expansion-pack, explosive-sheep, gnome, gnomes, goblin, goblins, goblins-vs-gnomes, hearthstone, massively-event-coverage, tcg, tcgmmo, trading-card-game
All products recommended by Engadget are selected by our editorial team, independent of our parent company. Some of our stories include affiliate links. If you buy something through one of these links, we may earn an affiliate commission.