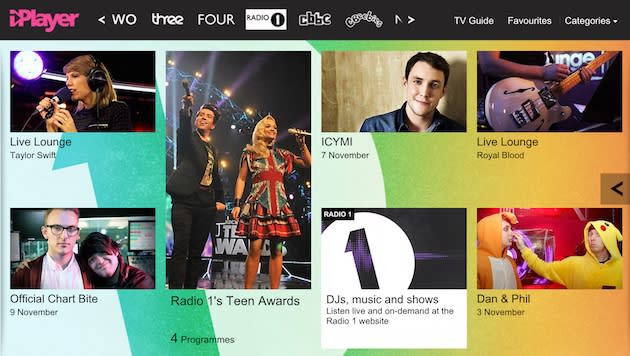 In a bid to serve the differing radio tastes of the nation, the BBC's line-up of numerical stations have provided live broadcasts and catch-up content for a number of years. Radio 1, which primarily serves around 40 percent of Brits between the age of 15 and 24, has experimented on YouTube and various social networks to engage more with its listeners, but the lure of iPlayer appears to have proved too strong. Today, the radio station has got a new dedicated presence on the Beeb's streaming service, offering access to an array of live and on-demand video from Radio 1's live events. It launches with plenty of content, including Live Lounges with Taylor Swift, Teen Awards coverage and a brand new chart show, putting more "Watch" in the station's Listen, Watch, Share tagline.

In this article: bbc, iplayer, radio, radio 1, uk-feature, video
All products recommended by Engadget are selected by our editorial team, independent of our parent company. Some of our stories include affiliate links. If you buy something through one of these links, we may earn an affiliate commission.