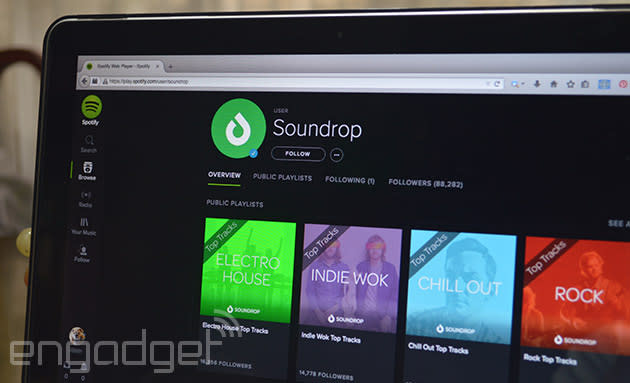 If you haven't fired up Spotify in a while, we have some big news for you: the service silently killed its App Finder platform for desktop in late October, and future versions of the client will remove the feature along with its library of apps. Because of that, Soundrop, a popular Spotify app, is shutting up shop on December 31st 2014. Soundrop provided the service's users a way to build communities with its listening rooms, way before Spotify launched its own share features. To use it, people need to log into a paid Spotify account and enter themed rooms to chat and listen to music with other fans of the same genre or artist.

Its developers aren't exactly killing the technology itself, as (in their own words) there's "a tremendous future for several components." Instead, the devs are exploring what they can do with their tech, either by themselves (they haven't sold anything yet) or with the help of partner companies, a spokesperson told TechCrunch. For now, they're just giving users enough time to move elsewhere and take friends along with them, while they're busy managing a separate venture.

In this article: apps, soundrop, spotify
All products recommended by Engadget are selected by our editorial team, independent of our parent company. Some of our stories include affiliate links. If you buy something through one of these links, we may earn an affiliate commission.