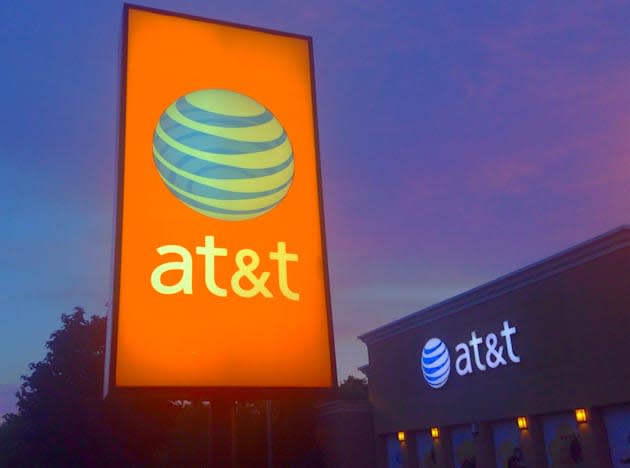 AT&T isn't backing down from its threat to halt its fiber rollout, which was a not-so-subtle jab at President Obama's pro-net neutrality / Title II comments earlier this month. Following an FCC inquiry about that announcement, AT&T said in a letter today that it's still going to move forward with existing fiber commitments -- it's just not going to make any new plans. AT&T's in a bit of a tricky spot: It already agreed to bring fiber to 2 million homes as part of its massive $48.5 billion Direct TV acquisition (which is still under regulatory review). But, well, new regulation bad! "AT&T simply cannot evaluate additional investment beyond its existing commitments until the regulatory treatment of broadband service is clarified," Robert Quinn, the company's senior vice president of federal regulatory, wrote in the letter. Check out AT&T's full response to the FCC below.

Re: Applications of AT&T Inc. and DIRECTV for Consent to Assign or TransferControl of Licenses and Authorizations, MB Docket No. 14-90

When AT&T announced its acquisition of DIRECTV in May 2014, we also announced our commitment to enhance and expand high-speed broadband service to at least 15 million customer locations, mostly in rural areas, utilizing a combination of technologies such as fiber to the premises ("FTTP") and fixed wireless local loop capabilities. "This new commitment, to be completed within four years after close, is on top of the fiber and Project VIP broadband expansion plans" that we had announced prior to the DIRECTV transaction.

The premise of the Commission's November 14 Letter is incorrect. AT&T is not limiting our FTTP deployment to 2 million homes. To the contrary, AT&T still plans to complete the major initiative we announced in April to expand our ultra-fast GigaPower fiber network in 25 major metropolitan areas nationwide, including 21 new major metropolitan areas. In addition, as AT&T has described to the synergies created by our DIRECTV transaction will allow us to extend our GigaPower service to at least 2 million additional customer locations, beyond those announced in April, within four years after close.

At the same time, President Obama's proposal in early November to regulate the entire Internet under rules from the 1930s injects significant uncertainty into the economics underlying our investment decisions. While we have reiterated that we will stand by the commitments described above, this uncertainty makes it prudent to pause consideration of any further investments – beyond those discussed above – to bring advanced broadband networks to even more customer locations, including additional upgrades of existing DSL and IPDSL lines, that might be feasible in the future under a more stable and predictable regulatory regime. To be clear, AT&T has not stated that the President's proposal would render all of these locations unprofitable. Rather, AT&T simply cannot evaluate additional investment beyond its existing commitments until the regulatory treatment of broadband service is clarified.

Accordingly, AT&T responds to Requests (a)-(c) of the Commission's November 14 Letter as follows:

Pursuant to the Second Amended Modified Joint Protective Order8 and the instructions set forth in the November 14 Letter and the FCC's Information and Data Requests dated September 9, 2014 in this proceeding, AT&T is filing herewith, via ECFS, this redacted public version. An unredacted Stamped Highly Confidential copy of this submission is being delivered to your office. Additional copies of the unredacted submission are being delivered to the Commission staff under separate cover.

[Photo:JeepersMedia/Flickr]
In this article: ATT, FCC, fiber, hdpostcross, net neutrality
All products recommended by Engadget are selected by our editorial team, independent of our parent company. Some of our stories include affiliate links. If you buy something through one of these links, we may earn an affiliate commission.