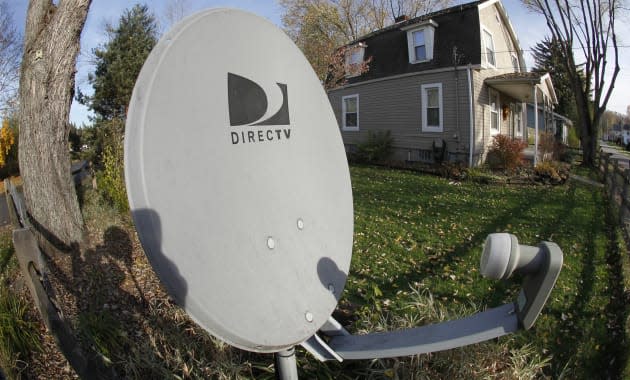 AT&T clearly isn't taking Comcast's recent acquisition efforts lying down; it just announced plans to buy DirecTV in a deal worth about $48.5 billion. The communications giant sees a takeover as an opportunity to expand how it delivers video beyond just the bundles it has today. If officials approve the merger, AT&T could send conventional and internet-based video to virtually any place you happen to be, whether it's on your phone or in mid-flight. This also represents a content grab -- DirecTV has the exclusive rights to NFL Sunday Ticket and other premium programming, so there's a chance that much of its content could reach U-verse and other AT&T offerings.

The telecom is making a lot of promises to assuage regulators that will no doubt look at the proposed mega-buyout very closely -- AT&T clearly wants to avoid a repeat of its failed attempt to buy T-Mobile in 2011. It hopes to bring high-speed internet access to 15 million additional customers, primarily in rural areas where a mix of fixed wireless and fiber-to-the-home could get people online. It's also guaranteeing internet-only service plans fast enough for online video ("at least" 6Mbps) for the next three years, and it will honor the FCC's 2010 net neutrality rules (which typically prevent blocking or throttling internet services) for that same period of time. DirecTV's stand-alone packages would be available at consistent prices nationwide during this stretch, too.

The move won't affect AT&T's plans to bid in the FCC's upcoming wireless spectrum auction, and it estimates that the purchase will start adding value within about a year of closing. Whether or not it closes is another matter. The US government already has concerns about the possible anti-competitive effects of Comcast's proposed buyout of Time Warner Cable; it's likely that the feds will take a similar approach to AT&T and DirecTV. If Comcast runs into regulatory trouble, it won't be surprising if AT&T ends up in the same boat.

Update: Not surprisingly, consumer groups aren't big fans. Free Press contends that AT&T has "clearly run out of ideas," and that the move is solely about eliminating competition. Consumer Reports' advocacy wing, Consumers Union, also believes that Americans are getting a raw deal. You'll find its full statement below.

On the heels of Comcast's bid for Time Warner Cable, AT&T is going to try to pull off a mega-merger of its own. These could be the start of a wave of mergers that should put federal regulators on high alert. AT&T's takeover of DirecTV is just the latest attempt at consolidation in a marketplace where consumers are already saddled with lousy service and price hikes. The rush is on for some of the biggest industry players to get even bigger, with consumers left on the losing end. You can't justify AT&T buying DirecTV by pointing at Comcast's grab for Time Warner, because neither one is a good deal for consumers.

In this article: acquisition, att, broadband, buyout, directv, hdpostcross, internet, nflsundayticket, poll, takeover, television, tv, u-verse, wedgies
All products recommended by Engadget are selected by our editorial team, independent of our parent company. Some of our stories include affiliate links. If you buy something through one of these links, we may earn an affiliate commission.