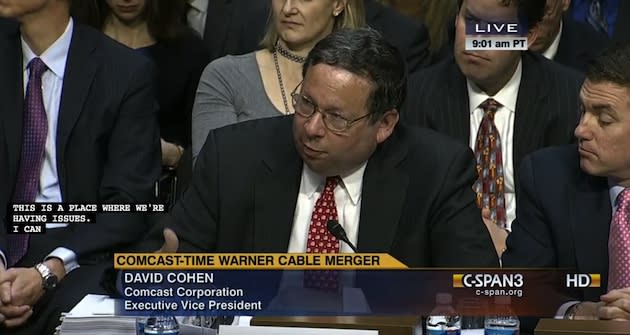 In a three-hour hearing today (watch it here or embedded after the break; read the statements here), executives for Comcast and Time Warner Cable joined a few others taking questions about their proposed $45 billion merger. Unfortunately, after pushing a 180-page explanation of how great an idea the merger is to the FCC yesterday, Comcast's David Cohen and Time Warner Cable's Arthur Minson didn't have much new to say. Senators including Al Franken, Amy Klobuchar and Mike Lee grilled the execs with questions about rising cable rates, channel bundles and network neutrality, mostly garnering the same answers we've heard before. Franken's questioning stood out, pointing out comments Comcast made during its acquisition of NBCUniversal citing Time Warner Cable as a competitor that could help keep it in check, even though now it says they don't compete for customers.

The prospect of the two companies joining to create one vertically integrated giant controlling both content and means of access to content for millions of people loomed over the proceedings. Comcast took the opportunity to announce higher speeds on two of its internet tiers in the Northeast, and call out its growing network of WiFi hotspots for customers, while once again promising new features and better tech for TWC areas. Still, with so many networks and access for 30 million customers potentially under one brand, Comcast/TWC's arguments about competition from Google Fiber, Netflix (which Comcast said it didn't fear in 2011), telcos and satellite didn't seem to hit the right notes.


Consumer advocate and CEO of Public Knowledge Gene Kimmelman, who opposes the merger, was also on the panel and called out the potential threat of the market being concentrated at a single point of connection. While he said that they're not necessarily doing it now, Kimmelman said the merged Comcast/TWC would have more power "to favor one product over another if it's financially advantageous." The cable companies were also taken to task for their poor customer service reputations, an area where Cohen admitted perhaps they needed a kick to do better. On the other hand, despite insisting that there's no evidence a merger would raise customer's rates and reduce choice, he also said they didn't expect to see lower customer prices.

Options some customers are looking for like a la carte programming or internet streaming to other devices were also left out of Comcast's reasoning. Cohen pointed to programming-rights issues for some of these concerns, which makes sense after Time Warner Cable faced a Viacom lawsuit over its TWC TV service. Still, as Franken put it, faced with over 100 lobbyists arguing for the merger to happen, and signatures from over 100,000 customers against it, there's wide concern it will lead to higher prices and worse service. There are still likely months of push and pull ahead over the potential deal, and we'll be interested to see if Comcast makes it happen with a series of concessions

In this article: comcast, google, hdpostcross, judiciary committee, merger, senator, timewarnercable, video, xfinity
All products recommended by Engadget are selected by our editorial team, independent of our parent company. Some of our stories include affiliate links. If you buy something through one of these links, we may earn an affiliate commission.