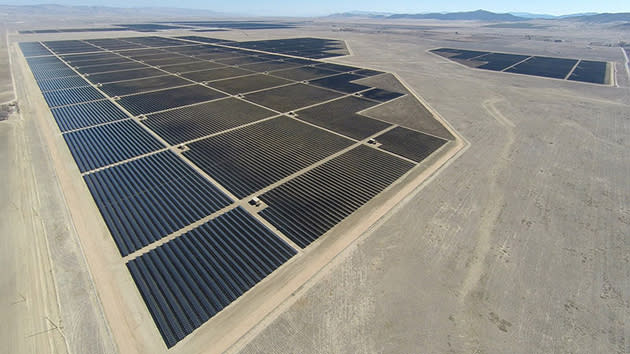 Solar power just hit one of its biggest milestones, in more ways than one. First Solar recently finished building Topaz, a 550-megawatt plant that represents the largest active solar farm on the planet. And we do mean large -- the installation's nine million solar panels cover 9.5 square miles of California's Carrizo Plain. It's an impressive feat that should power 160,000 homes on Pacific Gas and Electric's grid, although it won't be alone at the top for very long. First Solar's Desert Sunlight farm will match that capacity once its last solar cells go online, and SunPower's 579MW Solar Star is due to go live in 2015. Not that there's a problem with that, of course. These solar plants have been a long time coming, and they promise eco-friendly energy for hundreds of thousands of Golden State residents.

In this article: cleanenergy, cleanpower, electricity, energy, firstsolar, PacificGasAndElectric, pge, power, solar, solarenergy, solarpower, topaz
All products recommended by Engadget are selected by our editorial team, independent of our parent company. Some of our stories include affiliate links. If you buy something through one of these links, we may earn an affiliate commission.