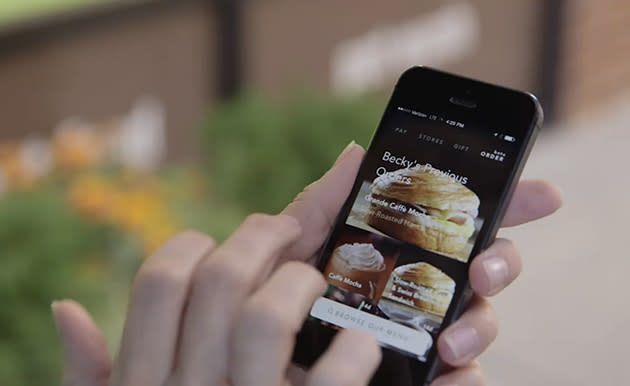 The Starbucks app's mobile ordering feature is finally here after months of speculation and anticipation -- and it's landed first in Portland, Oregon. Naturally. If you want to buy, say, an eggnog latte, you merely have to scroll through or search the menu, pick your items and your store of preference (you can choose an outlet elsewhere instead of the one closest to you), and then pay for it through your phone. The app even lets you customize your drinks like you would in-store, because the company knows its customers' predilection for mixing things up (triple venti soy, non-fat, half-sweet, extra foam eggnog latte with caramel drizzle, anyone?). Once that's done, just swing by the Starbucks you chose, tell the barista your name and you've effectively skipped the mile-long line.

According to Starbucks' digital officer Adam Brotman, the feature will make the "experience better for all customers in the stores, will make the lines shorter and baristas can spend more time making drinks and connecting with customers." iPhone users in Portland will enjoy exclusive access to the feature for a few months (you'll need to update the app to use it, of course), but the Mobile Order & Pay capability will eventually be released on Android before it becomes available nationwide by the end of 2015. After that, Brotman says Starbucks plans to launch mobile delivery, which will make the lives of interns and assistants all over the US a whole lot easier.

In this article: app, hipster, ios, mobile, mobileordering, mobilepostcross, oregon, portland, starbucks
All products recommended by Engadget are selected by our editorial team, independent of our parent company. Some of our stories include affiliate links. If you buy something through one of these links, we may earn an affiliate commission.