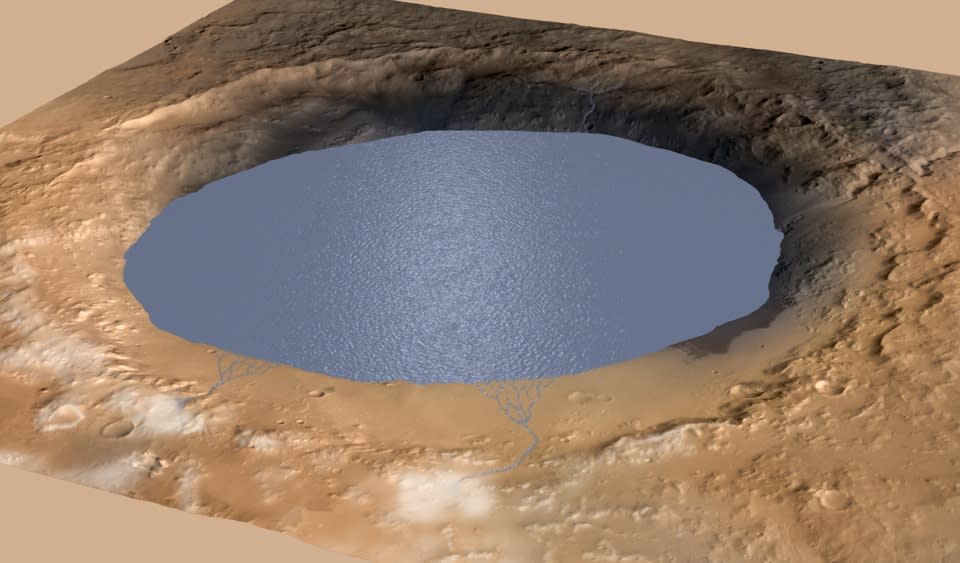 Humans have been speculating about water on Mars for hundreds of years, and now thanks to the Curiosity rover we're getting a better sense of how wet the Red Planet used to be. NASA revealed today that the Gale Crater, the 96-mile wide patch of land Curiosity has been exploring since 2012, held a large lake bed for tens of millions of years. What's more, the agency found that the three-mile high Mount Sharp, which sits in the middle of the crater, was likely formed by sediment deposits from the lake. The big takeaway? Mars was likely warm enough to house liquid water for long periods of time -- perhaps even long enough for life to form. "If our hypothesis for Mount Sharp holds up, it challenges the notion that warm and wet conditions were transient, local or only underground on Mars," said Ashwin Vasavada, NASA's Curiosity deputy project scientist. The only problem now is that we still don't know how the Martian atmosphere supported such a wet environment.

Curiosity previously found evidence of "vigorous" water flow, which fueled long-held speculation about water's presence on Mars. NASA is now focusing the rover's efforts on the lowest layers of Mount Sharp, which could give us a better sense of how it was formed. The findings will also help NASA when planning for future missions to seek out evidence of life on Mars, and potentially even affect how the agency approaches manned missions in the 2030s.

In this article: Curiosity, Gale Crater, Mars, NASA, space, TL16MRSAQUA
All products recommended by Engadget are selected by our editorial team, independent of our parent company. Some of our stories include affiliate links. If you buy something through one of these links, we may earn an affiliate commission.