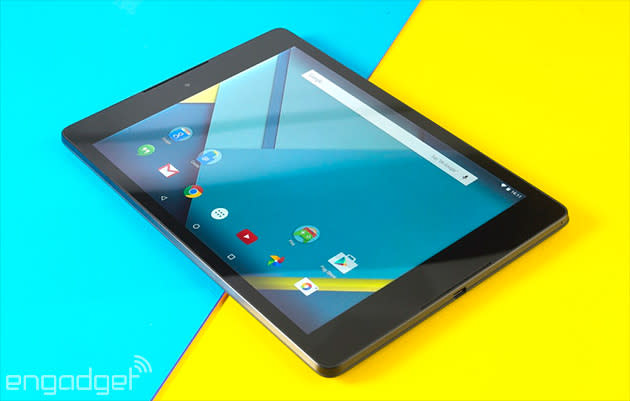 The Nexus 9 didn't completely knock our socks off, but HTC's inaugural Lollipop tablet just got a little better... if you're willing to pay a premium, anyway. T-Mobile's now selling an LTE-enabled version of the tablet on its enthusiast-only Underground store for $600, or $25 a month for the next two years if smaller, drawn-out payments are more your speed. Other than its compatibility with T-Mobile's LTE network, this version of the tablet is identical to the $479, 32GB WiFi model we reviewed last month, but we're still curious what those faster data speeds mean for this little guy's battery life. Nothing good, we'd wager. And if you're not the biggest fan of T-Mobile's posturing? Fair enough: It shouldn't take too long for an unlocked model to pop up in the Google Play Store, though the tab will make an appearance there before the holidays is anyone's guess.

Update: Not ready to go magenta? AT&T writes in to note that this slate is compatible with its LTE network as well, and available via the Google Play store for the same $600 price. There's a $100 credit available if you're willing to lock things down with a two-year contract, and prices start at $10 per month if you're adding it to an existing plan.

In this article: google, htc, lte, mobilepostcross, nexus, nexus9, t-mobile, tablet, tmobile
All products recommended by Engadget are selected by our editorial team, independent of our parent company. Some of our stories include affiliate links. If you buy something through one of these links, we may earn an affiliate commission.