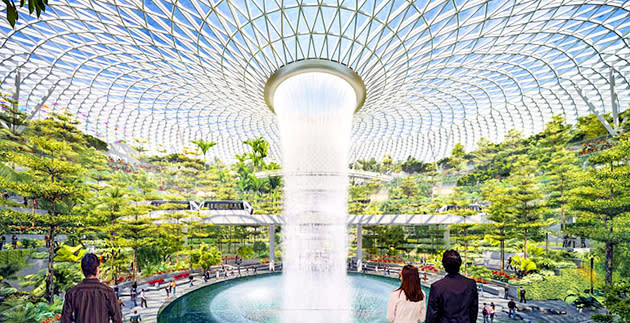 A man's home is his castle -- even if that castle happens to be a truck. A family of three recently transformed a small truck into a regal off-the-grid home complete with turrets and fake masonry. Singapore has seen a boom in innovative green architecture in recent years, and the city will soon be home to the world's lushest airport. Construction officially began last week on the Jewel Changi Airport, which will be filled with plants, and it will even feature the world's largest indoor waterfall. The massive biodome is expected to be completed in 2018. In other architecture and design news, the folks at Tentsile have created a new suspended tree tent that lets you create triple-decker tree houses in the sky. A team of tightrope walkers has them beat, however -- with a stupefying hand-knitted hammock suspended 400 feet above a desert canyon.

We're approaching the shortest days of the year, which means that residents of northern cities are severely sun-deprived. To make up for the lack of natural light, artists James Bowthorpe and Kim Coleman teamed up with architect Andrew Lock to design Winter Sun, a large art installation in London with 12 glowing "suns" that change brightness to emulate natural light. Iran is home to some of the world's most impressive mosques, and Mohammad Reza Domiri Ganji, an Iranian physics student and photographer, has captured the beauty of the buildings in an impressive collection of photos. Ganji's kaleidoscopic photos emphasize the mosques' geometric complexity.

Ever seen a bright green cat? Now you have. The viridescent feline was spotted in Bulgaria, where it surprised locals with its colorful coat of fur. When a turtle loses its ability to walk, there isn't much that can be done for it. Faced with such a problem, one German veterinarian decided to get creative. Borrowing from his son's Lego collection, he built a small wheelchair for a turtle named Blade, enabling it to move around on four wheels. In other news, a team of researchers from Stanford created a Mission Impossible-style human climbing system that's inspired by a gecko's sticky feet. In renewable energy news, scientists in Australia set a new world record for solar energy efficiency by successfully converting more than 40 percent of available sunlight into electricity. Brooklyn-based innovator BjornQorn figured out a way to make popcorn using giant mirrors. The company is releasing a limited edition tin of holiday popcorn that illustrates the process. At the high end of green design is Ralph Lauren's "Ricky" Bag, a chic purse that features phone-charging capabilities and integrated LEDs. The price? $5,000. With the holidays fast approaching, five expert Lego builders collaborated to build a 30-foot Christmas tree out of Lego bricks in Sydney. And don't forget to enter Inhabitat's latest contest, in which you can enter to win a Kinkajou Glass Bottle Cutter, which you could use to make all kinds of unique gifts.

Last year, Tesla CEO Elon Musk rolled out his vision for the Hyperloop, a futuristic mode of transportation that could whisk travelers from San Francisco to Los Angeles in just 30 minutes. Since then, UCLA launched a program with 25 graduate students working toward building a full-scale prototype of one of the system's pods. This week, the head of the UCLA program described the project as "insane" -- and he meant it in the most positive way. In other transportation news, BMW has announced plans to introduce plug-in hybrid versions of all of its core-brand models, beginning with the 3 Series. The world's largest long-distance car-sharing network, BlaBlaCar, is looking to expand after a huge $100 million investment by Index Ventures. The Paris-based company provides a cheaper alternative to other forms of public transport and also means spare car seats don't go to waste. To compete with local car-sharing services like Uber and Lyft, New York City taxis could soon get an app of their own, making it easier for riders to hail one of the city's 19,000 cabs. And in one of the most stunning images you'll ever see, Canadian photographer Stephen Orlando captured a kayaker's motion in a single, colorful long-exposure photo.

In this article: eco, environment, green, hyperloop, inhabitat
All products recommended by Engadget are selected by our editorial team, independent of our parent company. Some of our stories include affiliate links. If you buy something through one of these links, we may earn an affiliate commission.