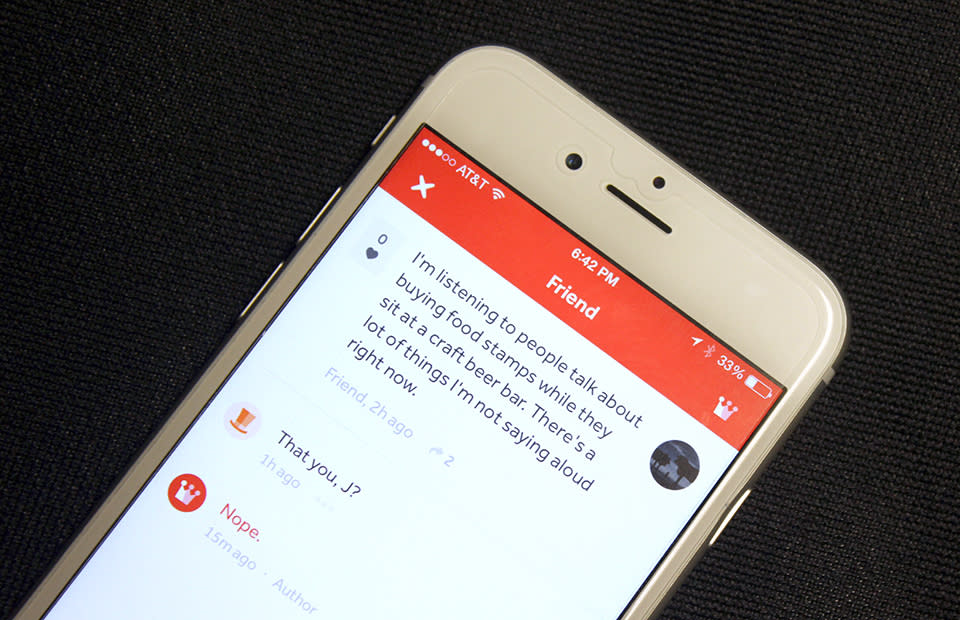 Secret first sprung into life in February 2014 as an app/social space where people could get together and engage in real talk, all while leaving their real names checked at the door. It generated Silicon Valley acquisition rumors. It sparked IRL dinner parties (complete with masks). And, as is often the case for the buzzy startup du jour, it got stale. So, what's a beleaguered company to do? Well, if you're Secret, you completely redesign your iOS and Android apps in hopes people fall in love with it again. Of course, a new coat of paint and some bolt-on features might not be able to change Secret's underlying problem. If you never played around with it, the original Secret was characterized by a long stream of observations, confessions and indictments, all framed in front of a colorful square background image (see above). That's all gone. This new take on Secret is focused solely on text, a more discreet -- not to mention a more easily scannable -- medium for sifting through your friends' confessions en masse. You can still add one of those images if you want, but they'll live in a tiny circle to the right of your message that needs to be tapped on to be seen. Now you can choose whether you want your contacts (culled and curated thanks to your phone number) or the people in your immediate area to see your latest missive; it used to be that both groups would see it.

And then there's the big addition: Chat. In the days of yore, when you wanted to engage others in a conversation, you had to either keep things nice and vague in the comments section or take things to a third-party service like Anonyfish. Tapping on someone's avatar is all it takes to fire up a conversation now, where you can reveal your true identities and start dishing dirt in earnest. Users have been asking for it, and now they've got it. Great. Here's the thing, though. There are plenty of thrills to be had sifting through people's dirty laundry, but the giggles are harder to find once you realize that A) most of the stuff you'll read is made up anyway and B) the rest of it is mostly boring. Consider the following popular Secrets culled from the top of my Friends feed:

Compelling stuff this ain't, and that selection provides a pretty thorough cross-section of the stuff you'll find on Secret these days. Most of the frothy insider gossip that characterized Secret's early success seems to have given way to mildly funny observations and plenty of self-aggrandizement. Sarah Perez over at TechCrunch takes a closer look at the mechanics of Secret's fall from buzzy startup grace, in case you needed to see the whole thing in slightly more concrete terms. In the past Secret has been compared (I'd say unfairly) to Frank Warren's PostSecret project, but that's totally off-base -- there's a level of humanity and artistry and pathos that goes into baring your soul via self-decorated postcard. That's not the case here. Today's update seems tailor-made to make Secret easier, more painless to use, but does little to rekindle the reckless, terribly fun spirit of its heyday. It's never been more clear that your Secrets are just snippets of text, basically indistinguishable from all the rest, a commodity to be converted into venture capital dollars by way of entrepreneurial alchemy.

In this article: anonymous, app, confession, secret, sharing, social
All products recommended by Engadget are selected by our editorial team, independent of our parent company. Some of our stories include affiliate links. If you buy something through one of these links, we may earn an affiliate commission.