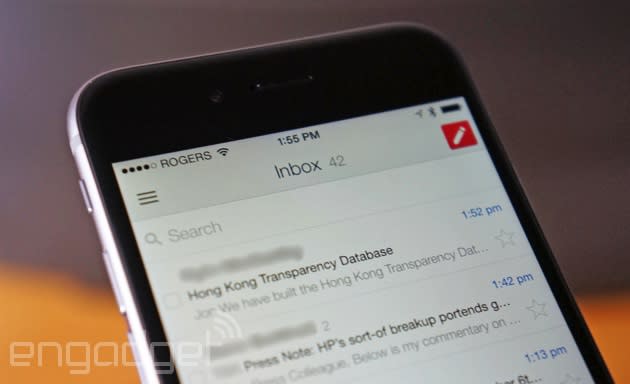 China's Gmail users have been the better of four days cut off from their messages, but that's slowly starting to change. According to Google's own transparency report, traffic to the email service is starting to pick up once more, signaling an end (for now, anyway) to yet another issue plaguing the search giant's operations in mainland China. The sailing isn't completely smooth just yet, though: The Financial Times reports that not everyone can access their emails, and some of those who can are experiencing delays when trying to send some.

Things slowly seem to be returning to the status quo, which -- let's remember -- isn't all that great to start with. Users of Google service ran into headaches earlier this year when the Great Firewall of China barred them from accessing Gmail (along with most of Google's web properties) through a web browser. They could still use Google's email protocols to access their messages through third-party apps, though, a loophole that slammed shut late last week.

At this point, none of us are exactly sure what caused the outage in the first place, Google told Engadget that they've "checked and there's nothing technically wrong on our end," while a Chinese Foreign Ministry spokesperson recently denied even knowing Google's mail service was experiencing issues. That hasn't stopped people from drawing their own conclusions, and it's no surprise that most of them lay the blame squarely at China's feet. Meanwhile, an op-ed published in the Global Times (a slightly more liberal newspaper operating under control of the state-run People's Daily) last night basically told users to deal with the outage if China indeed pulled the trigger.

"If the China side indeed blocked Gmail, the decision must have been prompted by newly emerged security reasons," the editorial reads. "If that is the case, Gmail users need to accept the reality of Gmail being suspended in China. But we hope it is not the case."

In this article: censorship, china, firewall, gmail, google, greatfirewall, outage
All products recommended by Engadget are selected by our editorial team, independent of our parent company. Some of our stories include affiliate links. If you buy something through one of these links, we may earn an affiliate commission.