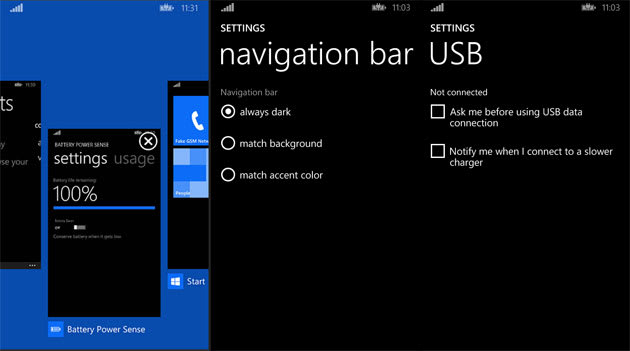 Up until now, the most we'd heard about the next rumored update to Microsoft's Windows Phone OS centered on two features: Cortana, the company's Siri-like digital assistant, and Action Center, its native notification center. Today, however, we have a clearer idea of where Windows Phone 8.1 could be headed thanks to a Reddit user who's allegedly gained access to the new SDK as part of Microsoft's developer preview program.

Despite both Cortana and Actions Center reportedly being marquee features of the new WP OS, neither are present on the leaked list of new WP 8.1 tweaks. That's likely due to secrecy surrounding the features and Microsoft's desire to unveil both publicly at BUILD this coming April 2nd, a date the dev mentions quite often in the thread. What this leak does give us confirmation of is how Microsoft is working to unify development between Windows RT 8.1 and Windows Phone 8.1 on the back end; something it's calling Universal Apps. Developers using the new SDK will be able to create applications for both app storefronts using a shared JavaScript/HTML code and provided templates.

Windows Phone 8.1, which according to the provided SDK documentation has been relabeled WinPRT, also ushers in a critical change to SD card functionality that should please longtime critics of the platform. Namely, users can now install apps to SD card and not just sideload from it, thus freeing up internal storage. Bing apps are now apparently pre-baked into the OS, as are a trio of "sense" apps to monitor battery power, data and storage. SkyDrive, as previously reported, has been rebranded to OneDrive and there's even a new Music app on deck (said to resemble Xbox Music) to replace the former Music+Video.

One of the more surprising changes Microsoft's made to the Windows Phone platform focuses on how it handles SMS receipt and delivery. With WP 8.1, text messaging will no longer be restricted to the native SMS app. The messaging settings submenu includes the ability to specify which third-party app routes that communication by default.

Users expecting new live tile sizes will be disappointed since this update doesn't include any options beyond the three already available in the OS. Although, there are apparently plenty of minute cosmetic overhauls packed into the 8.1 update. Among these are new default transitions for moving between apps and homescreens, a navigation bar with color settings to match backgrounds or accents, gestures to hide and reveal the onscreen navigation buttons, as well as the addition of Windows RT's progress ring. Back button functionality now also falls in line with WinRT in that it simply sends applications into a 'suspend' state, as opposed to terminating them. To actually close apps out, users will have to enter into multitasking view and swipe down to end the process.

This long list certainly represents a heady mix of some overdue and even unexpected OS tweaks; tweaks that could help Microsoft catapult its struggling mobile OS to prominent market share. But it's likely just a preview of what Microsoft has planned for WP 8.1, so don't expect this to be the last we hear of the platform's next iteration. We've still got a couple of months to go before Microsoft BUILD can reveal most, if not all of Windows Phone's new direction, leaving ample time for like-minded devs to pull back the curtains even further.