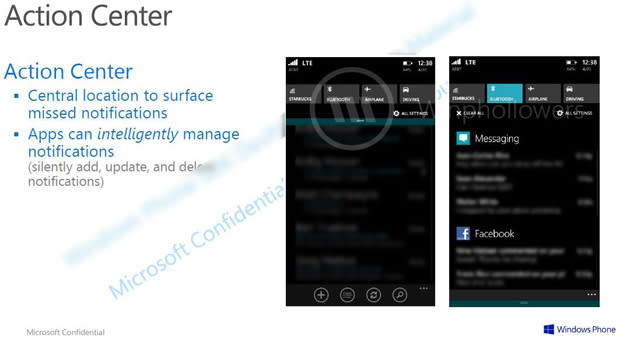 Wondering what Windows Phone 8.1's rumored notification hub would look like? You may be looking at it right now. Winphollowers claims to have a leaked Microsoft presentation outlining the feature, which might be called Action Center. While Windows Phone's approach to notifications would share much in common with what we've seen for a while in Android and iOS, it would have a few tricks up its sleeve. A driving mode shortcut would be available to (presumably) keep distractions to a minimum while on the road. Apps may also have more control over their notifications than you've seen on some other platforms. Alerts would silently appear, update or vanish, making it easy to deliver constantly changing information (think sports scores) or to clear out time-sensitive notices when they're no longer relevant. There's no guarantee that we'll see Action Center in 8.1, but the historically reliable WPCentral vouches for its existence -- we won't be surprised if it's part of the final OS release.

In this article: actioncenter, blue, leak, microsoft, mobilepostcross, notifications, smartphone, windowsphone, windowsphone8.1, windowsphoneblue
All products recommended by Engadget are selected by our editorial team, independent of our parent company. Some of our stories include affiliate links. If you buy something through one of these links, we may earn an affiliate commission.