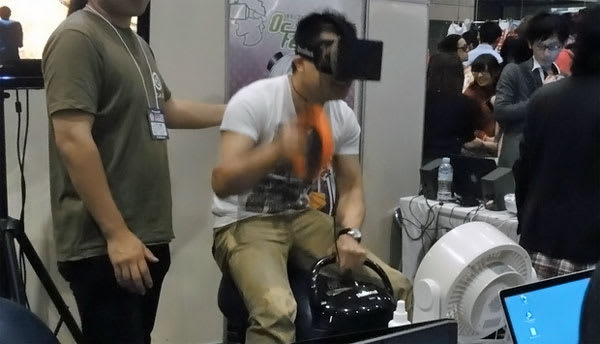 In the midst of the mind-boggling Nico Nico Chou-Kaigi, an event hosted by one of Japan's leading video streaming sites, there was no shortage of Oculus Rift demos for attendees to drop their jaws at. Our allies at Engadget Japanese toured military carriers, controlled robot arms... generally did a load of fun things and pretended like it was work. The Hashilus horse riding simulator looked to be the most intriguing, however. It combined a horse riding exercise machine with an Oculus Rift set (oh and a fan, for immersion), to offer a relatively straightforward no-bad-guys-to-kill race, up and down a few hills. It's a simplified experience, there's no steering here, but players can use the tambourine-ish controller to speed up, or slow down, their steed, all while drinking in that Rift-provided 360-degree view. Bikes, schmikes.

Extra: It looks like Oculus Rift founder Palmer Luckey even got the chance to try it out earlier this month. You can see his reaction after the break -- he seemed to like it.

Source: Engadget Japanese
Coverage: Ocufes (Japanese)
In this article: hashilus, horseriding, horses, niconicochokaigi, oculusrift, or, video, vr
All products recommended by Engadget are selected by our editorial team, independent of our parent company. Some of our stories include affiliate links. If you buy something through one of these links, we may earn an affiliate commission.