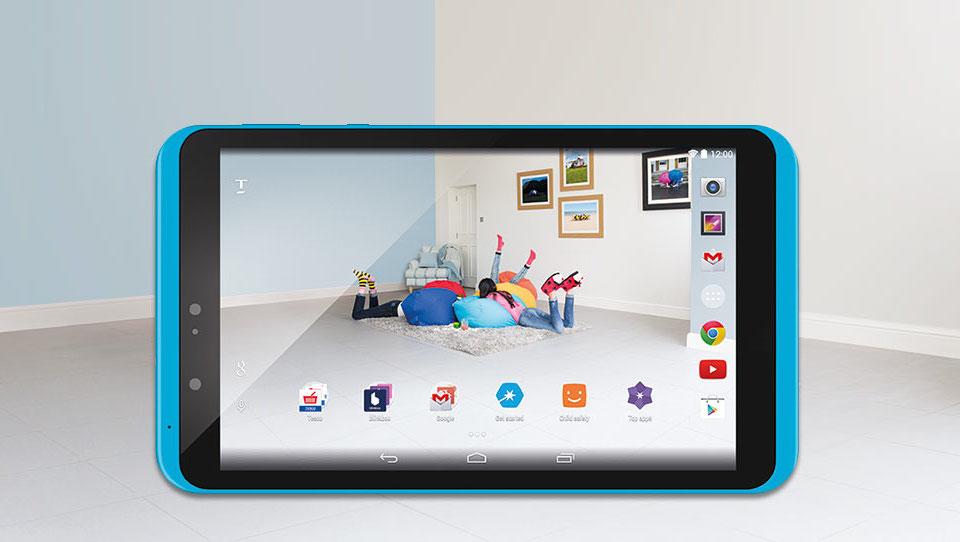 A popular supermarket chain isn't the first place you'd expect to find an own-brand tablet, but with its low price and a prime spot next to the beans, Tesco's Hudl has sold over 750,000 units since launch. While plans to also enter the smartphone racket have been put on hold, today Tesco's spilled all the details on its second-gen slate: the Hudl2.

The first thing you'll notice is that Tesco has stayed with what works. The Hudl2 shares a similar design with its predecessor, but is a little bit bigger. However, the bezels are vastly smaller, giving it a more premium look. It comes with a toughened 8.3-inch Full HD touchscreen, and a thinner chassis that ships in a variety of eight different colours: black, blue, purple, red, aqua, pink, orange and white.

Must read: Hands-on with Tesco's Hudl2 Like the original tablet, Tesco's Hudl2 undercuts many of its rivals at £129, and you can also bring that cost down by trading in some of your Clubcard points. While the device is being unveiled today, you'll have to wait until October 9th to get your hands on it (although pre-orders will open the day before). Inside, there's a 1.83GHz Intel Atom quad-core processor (which Tesco says makes it three times faster than the original) and 2GB of RAM, stock Android 4.4.2 KitKat, 5-megapixel rear-facing camera and a 1.2-megapixel front facer, Dolby-optimised rear-facing speakers, HDMI-out, dual-band Wi-Fi, 16GB of internal storage (with a microSD slot taking it up to 48GB) and according to Tesco, a battery that'll last around 8 hours on a full charge.

Recognising that customers are buying Hudls for their children, Tesco has included a new range of child-safety tools. When they first turn on the tablet, parents will be asked to set up features that can block sensitive content or restrict the amount of time that a child plays on the Hudl 2, to the point where it'll turn itself off when it's time to go to sleep. App access can be locked down in up to seven profiles, protecting young eyes from the darker downloads on the Play Store.

Tesco is also ramping up the number of accessories it offers with its tablet. This year, Tesco is offering up to 64 tablet and case colour combinations for the Hudl2, including the wonderfully-named Perky Purple & Red and Dreamy White & Bluespotted cases, as well as coloured on-ear and in-ear headphones, screen protectors and stylii.

You'll be able to turn every £5 of Clubcard vouchers into £10 towards the hudl2 and its accessories, bringing the price down to just £65. That'll make it a much more attractive proposition when you're traversing the aisles during your weekly shop. You'll also get a book of vouchers in the box, including £25 free blinkbox credit, £10 off F&F with £50 spend, £10 off Tesco Direct when you spend £50, £15 of Tesco.com when you spend £60 and money off prints and Tesco Photo. Tesco will also continue to sell the original Hudl for £99, but the company says when stock is gone, it's gone.

In this article: android, hudl, hudl2, intel, mobilepostcross, tablet, tesco, uk-feature
All products recommended by Engadget are selected by our editorial team, independent of our parent company. Some of our stories include affiliate links. If you buy something through one of these links, we may earn an affiliate commission.