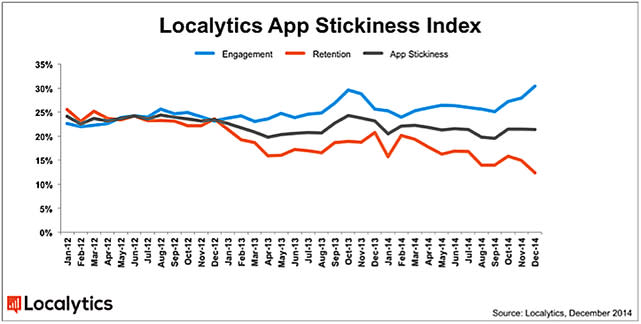 That's a question app marketing platform Localytics was interested in, and they have provided some enlightening answers in a recent report.

The firm defines "engaged" as using the same app 10 or more times per month. The percentage of apps meeting that criteria soared from 25 percent in the third quarter of 2014 to a high of 30 percent in December, 2014. But user retention –- the percentage of users returning to an app within a three-month window –- declined, ending the year at 12 percent as some people abandoned apps when switching over to new devices or upgrading their operating system.

According to the research, media and entertainment apps performed the best for overall app stickiness in Q4 2014 peaking at 26 percent, a 4 percent increase over Q3. Localytics defines app "stickiness" as the average of an app's engagement and retention. Business productivity and technology apps experienced the most improvement over the course of 2014, starting at just 15 percent and increasing app stickiness to 23 percent by the end of the year.

Travel and leisure apps experienced the biggest increase in the volume of app launches per average user per month growing from 10 in Q3 up to 12 in Q4 –- reflecting the season's Q4 travel trends. Meanwhile, media and entertainment apps remained consistently high with users launching them 12 times per month, on a par with Q3. By contrast, games apps had the lowest number of launches per month, just fewer than eight.

The Localytics Indexes provide marketers with a benchmark against which to measure and refine their app engagement strategies. They are compiled through the continuous analysis of 28,000 apps across more than 1.5 billion devices. To see the study in detail, head to this link.

In this article: app+engagement, iOS, iPad, iPhone, iPod, Localytics, news, research
All products recommended by Engadget are selected by our editorial team, independent of our parent company. Some of our stories include affiliate links. If you buy something through one of these links, we may earn an affiliate commission.