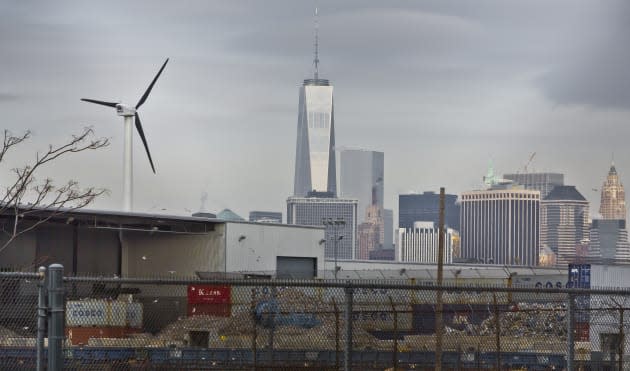 Sunset Park in Brooklyn is home to New York City's first commercial-scale wind turbine, and it's already flexing its green muscle. In under a month, the 160-foot-tall power source produced enough juice to power two homes for more than 12 months. It's not being used to supplement regular energy use, though, as it feeds a recycling plant at the South Brooklyn Marine Terminal -- a facility that already gets 16 percent of its power from solar panels. NYC seems like the last place a massive wind turbine would make a difference, but the height of this installation, coupled with the open landscape on the shore of Sunset Park, makes for an effective combo that's capable of generating up to 100 kilowatts. Attempts to harvest the wind in New York City are nothing new, but they're typically used to power much smaller buildings, so their size and output are a fraction of this one at Sims Metal Management. Construction costs tallied $750,000, and the project is expected to pay for itself in five years.

In this article: brooklyn, green, greenenergy, newyork, newyorkcity, nyc, science, turbine, wind, windpower, windturbine
All products recommended by Engadget are selected by our editorial team, independent of our parent company. Some of our stories include affiliate links. If you buy something through one of these links, we may earn an affiliate commission.