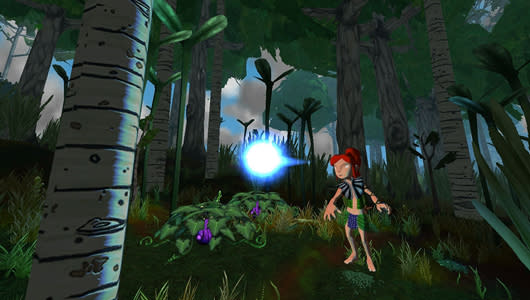 The Untitled Game, better known as TUG, is one of the many recent titles that have earned a small crowdfunding fortune by shouting the word "sandbox" as loud as the internet will allow. The game's initial Kickstarter campaign raised $293,000; launching on Steam's Early Access marketplace helped Nerd Kingdom rake in an unspecified amount of additional dollars. The studio had a bold plan for an open-world, innovative crafting MMORPG, and it appeared as though players were ready to pay for it.

Things haven't gone so swimmingly since then. Funding issues in late 2014 forced the studio to lay off around half of its staff. Many MMO industry followers have been wondering whether the project will ever be released or it's just another crowdfunded pipe dream.

I took a look at TUG on the show floor at PAX South 2015 and talked to COO Brennan Priest about crowdfunding, layoffs, and killing things with axes. The one thing I can say for sure is that there is definitely a game here, and it seems as if it could be a good one.

Do what you want

During my TUG play demo, I watched Priest craft a simple hammer, build structures out of mud, and use an axe to slay a large predatory cat. As in Minecraft, in which TUG clearly has roots, these systems are all interlocked via an intricate crafting economy. Wood, metals, stone, skins, fur, and everything else you can find can all be used to build survival tools and structures. According to Priest, TUG's procedural engine was developed entirely from scratch to support crafting and building along with combat and complex character progression mechanics. A favorite highlight of the conversation: Each TUG world is as large as our actual sun. TUG is still in very early alpha. The seams show. But the core vision for the project is in place. You, a newborn seedling, are thrust into the world and challenged to survive (if you're playing survival mode). It's up to you to scavenge food, make tools, find shelter, and carve a path toward success. Your actions in the game have long-term ramifications on your character; run and hunt a lot and you'll stay lean and strong, but spend weeks inside crafting potions and you might find it harder to fit into your robes.

Nerd Kingdom is using a tiered development system that Priest refers to as "the verbs." The goal for now is simply getting each system of the game implemented and working (many already are) on a base level, then adding the more advanced tiers of those systems as development continues. Says Priest, "We're implementing basics...we wanted people to feel that ultimately we're going to have this progression." There's also been an enormous focus on supporting the mod community, with modders already changing out enemy skins and developing their own authoring tools.

Priest concludes, "The reason we called it The Untitled Game is we're giving you a bunch of tools to play with and go make your game; [it's] very modder-focused and very player-focused." The final version of the game is still a ways away, but with new private funding enabling the re-hiring of almost all of last year's laid off staffers and new features rolling out on a steady basis, things look bright for TUG and its backers.

Massively's on the ground in San Antonio during the weekend of January 23rd to January 25th, bringing you all the best news from PAX South 2015. Whether you're dying to know more about Guild Wars 2's Heart of Thorns, hoping to catch a glimpse of Elite: Dangerous on the Oculus Rift, or angling for some rumors from the SWTOR cantina crawl, you can bet we'll have it covered!
In this article: alpha, alpha-test, alpha-testing, beta, brennan-priest, con, convention, crowdfunding, event, event-coverage, events, expo, featured, funding, fundraising, half-feature, hands-on, interview, interviews, kickstarter, massively-event-coverage, nerd-kingdom, pax, pax-2015, pax-south, pax-south-2015, penny-arcade-expo, sandbox, testing, the-untitled-game, tug
All products recommended by Engadget are selected by our editorial team, independent of our parent company. Some of our stories include affiliate links. If you buy something through one of these links, we may earn an affiliate commission.