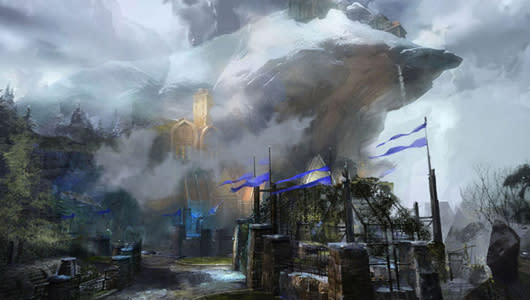 ArenaNet's Mike O'Brien and Colin Johanson (and Commander Shepard) took to the PAX South 2015 stage yesterday morning to announce Heart of Thorns, the first-ever expansion for Guild Wars 2. If you're not up to speed, check out our post covering the announcement and the official site to get the broad strokes on the expansion's new zone, new profession, new progression system, and more.

News of the expansion raised many a question from our readers (and our staff!). Massively's Larry Everett and I sat down with O'Brien and Johanson to try to get those questions answered and dive a little deeper into the changes coming to Guild Wars 2's living world.

And no, there isn't a release date.

Heart of Thorns doesn't raise the Guild Wars 2 level cap. Instead, it introduces an entirely new system of progression called the mastery system. ArenaNet is aiming to provide a more flexible approach to character progression with more lasting results. Explains O'Brien, "Guild Wars 2 players have very high expectations of what an expansion pack should bring to Guild Wars 2. If we put together an expansion pack that was a normal MMO expansion pack, I think people would [have run] up onto the stage." According to O'Brien, the goal behind the mastery system is introducing ongoing character progression that defies the regular expansion treadmill. The introduction of the mastery system also helps ArenaNet solve the problem of existing content. Challenges awarding mastery points will be introduced to the core Guild Wars 2 world, meaning old content won't simply become a blur as players rush through to get to the expansion stuff. O'Brien notes that ArenaNet is being careful to include mastery points all over the current Guild Wars 2 landmass, explaining, "We're going to keep evolving the world, and we intentionally picked a strategy where it's not leaving behind a wasteland." This also reflects the core reasoning behind leaving the current level cap in place, with Johanson emphasizing, "This is about respecting players and respecting their existing investment in the game, making sure we continue to offer new challenges without just putting them on a treadmill."

Stronghold, a new PvP game mode, was a particular focus during our conversation. According to Johanson, Stronghold was developed as a way to offer a more dynamic PvP experience that's as fun to watch as it is to play -- even for non-PvP players. "You might be somebody who's not as good at killing enemy players," he says, "but the thing that you love is gathering supplies, hiring troops, and trying to get them to the stronghold." Stronghold will give players more roles to play in PvP and ensure those roles are fluid throughout the progression of a match. Match times and team sizes aren't nailed down, but it sounds as though they'll be quicker rather than longer and will fall somewhere within the current PvP skirmish size. We pressed ArenaNet for more information on guild halls -- especially on how small guilds will fare compared to massive ones -- but the studio didn't spill. Smaller guilds are in the discussion, however. Johanson elaborated, "It is important to us that our guilds feel like they are all important in our world, and we'll make sure they are treated respectfully." If you're panicked about whether your guild will have a chance, hopefully that helps stop your hyperventilating.

Many of the specifics regarding Heart of Thorns are yet to be revealed. ArenaNet is playing it close to the chest, and several questions we asked were answered with some variation of "that information will be available sometime between now and launch." But the studio wants players to know that it's being upfront about everything Heart of Thorns represents to the game. For instance, here's O'Brien's answer to the "but what about non-legendary crafting?" question:

"We said today that we would reveal every major feature of the expansion pack, and we did. If you're wondering whether there's some overhaul of non-legendary crafting that we're just not telling you about, no -- we told you what we're focused on. This is the list of focuses for this expansion pack." Much emphasis was placed on the role of Heart of Thorns as a framework for moving Guild Wars 2 forward in the near and distant future. When asked about the current issue with what some players consider to be an excessive number of currencies, for instance, Johanson pointed to Heart of Thorns as the solution. "Ultimately people want compelling rewards, and they want to feel like they have clear systems that communicate those rewards [...] Some of the currencies we have today are a result of not having [those systems]; the mastery system addresses that by providing one key progression system."

O'Brien offered a similar thought when asked if players could expect future expansions following Heart of Thorns. "This expansion is about laying the groundwork," he says. "We are building Guild Wars 2 to be the game that we want to be evolving over the long-term."

Asked directly about the price of the expansion, O'Brien says, "It's a boxed expansion pack," which provides a small hint but no real information as to how much Heart of Thorns might run. The same can be said for O'Brien's answer to the release date question. "We just announced today that we're going to be at PAX East with the first playable demo, so things are going to happen fast," he explains. A beta period will follow, and the expansion will launch when ArenaNet feels it's ready.

ArenaNet is promising to discuss Heart of Thorns in great depth as the expansion moves closer to launch. If you didn't have your specific question answered today, we can assume the general answer from the studio is, "Stay tuned."

Massively's on the ground in San Antonio during the weekend of January 23rd to January 25th, bringing you all the best news from PAX South 2015. Whether you're dying to know more about Guild Wars 2's Heart of Thorns, hoping to catch a glimpse of Elite: Dangerous on the Oculus Rift, or angling for some rumors from the SWTOR cantina crawl, you can bet we'll have it covered!
In this article: anet, arenanet, buy-to-play, colin-johanson, con, convention, event, event-coverage, events, expo, fantasy, featured, guild-halls, guild-wars-2, gvg, gw2, heart-of-thorns, interview, interviews, massively-event-coverage, mike-obrien, ncsoft, pax, pax-2015, pax-south, pax-south-2015, penny-arcade-expo
All products recommended by Engadget are selected by our editorial team, independent of our parent company. Some of our stories include affiliate links. If you buy something through one of these links, we may earn an affiliate commission.