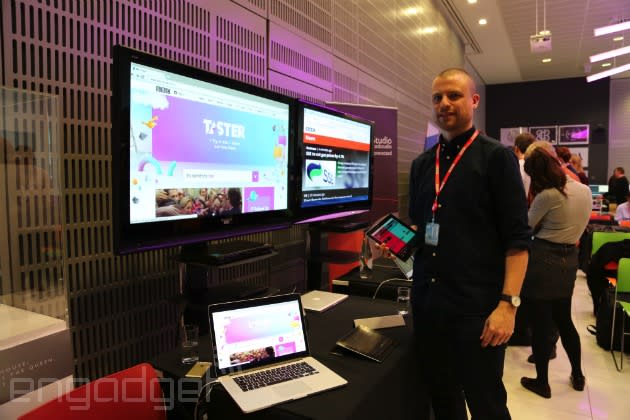 The BBC is getting a little experimental. Or rather, it wants to show people more of the crazy, forward-thinking ideas that it normally cooks up behind closed doors, and which often never see the light of day. To solve this, the broadcaster is launching a new platform called Taster, where it'll be releasing a steady stream of shows and features that challenge its traditional output. Anyone can access the site online and the BBC is keen for people to get hands-on, whether that means signing up for a new version of iPlayer, or watching some of its creative show formats. You'll then be able to submit feedback, and the BBC will use it to decide which ideas are worth developing for primetime public consumption.

So what's on offer? Well, one of the first notable projects is a shuffle-based version of iPlayer. After opting in, the service will automatically queue up new shows based on what's playing and what you've streamed in the past. Other projects include an unedited, interactive interview between Lena Dunham and Jennifer Saunders, as well as a competitive voting system for Radio 1. By opting in to Taster, you're essentially joining a BBC open beta program. It's a new level of transparency for the company and could, provided it attracts enough users, change its future output in new and unexpected ways.

In this article: BBC, BbcIplayer, iPlayer, Taster
All products recommended by Engadget are selected by our editorial team, independent of our parent company. Some of our stories include affiliate links. If you buy something through one of these links, we may earn an affiliate commission.