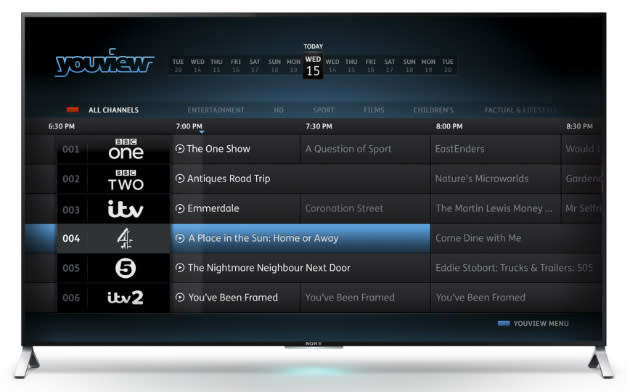 When Sony announced its new Bravia TVs at CES, it wasn't just the razor-thin form factor that had attendees leaping for joy. At last, Sony had thrown out its own software efforts in favour of Android TV, Google's burgeoning TV platform. Now, we've found out that Brits are going to get something just a little bit different. Starting this summer, Sony's 2015 Bravia TVs will run two different platforms in the UK: Android TV and YouView. Exactly how these offerings will co-exist isn't clear, but the advantages are obvious; with YouView, Sony now has a proven platform that lets Brits watch both live TV and catch-up services such as BBC iPlayer and 4oD. Everything is accessible from a single guide, so for newcomers it's easy to scroll back and watch shows without launching separate apps. However, we're keen to see Sony's implementation. If you're forced to bounce between YouView and Android TV to access different apps, it could be an awfully confusing and irritating experience.

In this article: 2015, android tv, bravia, sony, tv, youview
All products recommended by Engadget are selected by our editorial team, independent of our parent company. Some of our stories include affiliate links. If you buy something through one of these links, we may earn an affiliate commission.