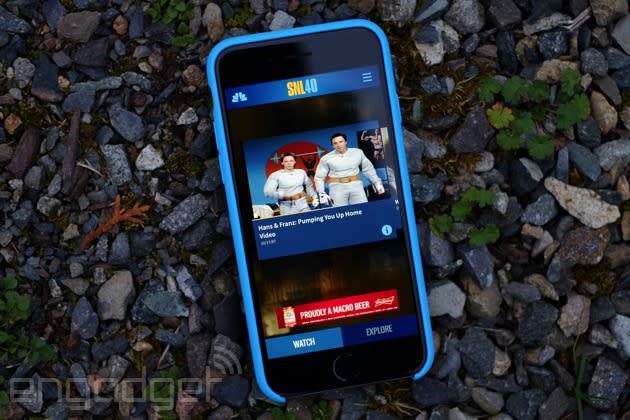 Practically everybody has at least one favorite Saturday Night Live sketch. Whether you lean more toward Wayne's World than Father Guido Sarducci, Brian Fellow or Stefon, though, now you can stick 'em all in your pocket with the SNL app for iOS. As The Hollywood Reporter notes, the application features over 5,500 sketches from the show's four-decade run, you can search for sketches by cast member or character and even catch a handful of full-length recent episodes. With a good chunk of the show's run on Netflix, asking why you should download this is perfectly reasonable. Well, for starters the free app is a much more approachable way of jumping into the show's considerable history -- especially compared to how Yahoo Screen handles clips.

I searched for "John Belushi bees," for example, and had two full sketches in a matter of seconds instead of scrubbing through entire episodes for just one video. After the sketch finished, another related one immediately auto-played. Pretty cool. Robust as it may be, however, it does't have everything -- like the exact "bee" clip I was looking for, nor does it include musical performances. Meaning, if you want to see James Hetfield of Metallica get away with dropping an F-bomb during "Fuel" or Sinéad O'Connor rip up a picture of the pope, you'll have to look elsewhere. But, if you want to send an emoji version of Hans and Franz to pump up a friend, the app offers a downloadable keyboard featuring adorable show-themed images. All this, of course, is just in time for Sunday's three-hour 40th anniversary special.

In this article: app, hd, hdpostcross, IOS, mobilepostcross, SaturdayNightLive, snl, StreamingVideo
All products recommended by Engadget are selected by our editorial team, independent of our parent company. Some of our stories include affiliate links. If you buy something through one of these links, we may earn an affiliate commission.